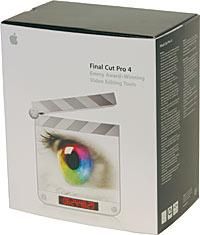 High end editing software is, by necessity, complex. Editors demand an expansive array of features all stuffed into a single, unified package. It used to be that you’d edit video in one app, drop out to another for audio and work with a totally separate one for compositing. Recently, we’ve seen more and more editors that do it all. Few, however, do it as well as Final Cut Pro 4.

We’ve only got a few words here, so let’s start by saying that all of the good things we said about version 3.0 (May 2002) remain true. The new UI is elegant, but familiar. Keyboard customization is complete and effortless. Project management bins are robust and easy to use. Nested sequences keep control of timeline clutter.

Of course Final Cut Pro (FCP) is a solid and useable editor, but it is also such a competent compositing tool that you won’t need to fire up After Effects for most tasks. In the new version, we were notably impressed with the universal implementation of effects animation envelopes right on the timeline. We love the neat overlay popup in the Canvas window that really simplifies some common, but otherwise involved, editing tasks.

We tested FCP4 on a dual-1.25GHz G4 with a gig of RAM, and found that it had real-time performance in many everyday situations. We can report that, on this machine, anything beyond a transition required some rendering to output DV to an external device (a DV camcorder). Full quality output, and even previews, on this machine, fell short of what we’ve seen on 2-3GHz Wintel machines (see last month’s review of MediaStudio Pro 7). Although we don’t have a benchmark here that can span the two platforms, even the fastest MPEG renders on this G4 were slower than the average Wintel box by a wide margin.

We aren’t being Apple Apologists when we say speed isn’t everything. Although previews and renders are slower, FCP4 itself is extremely lithe and responsive, lacking any noticeable pauses or delays when working, and FCP4 was bedrock stable: we experienced no crashes in any of our tests.

FCP4 has much-improved audio mixing features, including real-time audio effects (a minor rendering annoyance with FCP3). FCP4 won’t replace your audio editor, which is why the express version of Peak 3 is included in the bundle. Our favorite new audio feature is the mixer, where you can ride the faders during playback and record changes to an envelope. This could leave you with hundreds of nodes, but keyframe thinning produces smooth curves that are easy to adjust.

On the musical side, the FCP4 suite includes a loop-based music creation tool named Soundtrack that you might call Apple ACID. It is very slick looking, easy to use and wildly fun. Creating a competent musical soundtrack will take some time, but you don’t need a huge amount of talent to get some decent results, only a good ear. The app comes with a disc full of loops, but is also compatible with just about any loop library you can find, including ACID-ized media that contains key, tempo and beat information.

The other flashy app in the new FCP4 suite is LiveType, which is a full multitrack compositor that specializes in text. LiveType is impressive beyond words. For such a complex and powerful environment, it is amazingly accessible. LiveType comes with two discs of absolutely stunning templates to get you started. The fully animated media and templates include gorgeous backdrops, lower thirds and scripted text animations, all of which are customizable to one degree or another. How good is LiveType? You may never need to open After Effects to animate titles again.

The third member of the FCP4 companion apps is not nearly as flashy, but it is impressive nonetheless. Compressor is a batch rendering utility not unlike Discreet cleaner or Canopus ProCoder. From within FCP4, select Export > Using Compressor and then drag templates from the preset list to your project. You might select a high-quality MPEG-2 render for DVD and a couple of MPEG-4 renders of different qualities for output to the Web. Next, hit the Submit button and let the Batch Manager render the various distribution versions of your project.

One potential hurdle for FCP4 is the upgrade path. FCP4 requires OSX 10.2.5. So, if you have been using FCP3, you might need to upgrade your OS to 10.2 ($129). Then, depending on when you upgraded to 10.2, you might need to make a couple of free 10.2.X updates to 10.2.5. Yes Macficionados, we know very well that Windows has dozens of confusing updates as well, but we can’t think of any editing software that requires WinXP users to update to a specific version before it will work.

Got it in Writing

We can say that FCP4 has, without question, the best default documentation of any editor out there. Our careful laboratory measurements revealed 6lbs 10.9oz of text spanning approximately 1,800 pages. It is, as near as we can tell, the same documentation from FCP3, however: you won’t find any printed material on Soundtrack, LiveType or Compressor (Soundtrack could use it). If you need more help, sign up for Apple Authorized training in any of 16 countries on four continents, including 18 states here in the US.

FCP4 is not easy to use or learn: full-featured editing environments all have steep and long learning curves. FCP4 is, however well designed, polished and eminently usable. It has some of the strongest compositing and animation tools of any editor around. At a thousand dollars, it is not inexpensive, but the full suite includes Soundtrack (ACID is about $350), Compressor (cleaner 6: $550) and the incomparible LiveType, which makes FCP4 an astounding value.

Four apps in one suite make Final Cut Pro 4.0 the most complete and powerful editing package found in a single box.