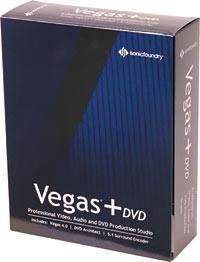 Vegas has been one of our favorite editors since it first came out, and over just a few years it has developed quite a popular following. It’s reputation is well deserved not only as an editor, but as a capable compositor as well. If you are in the market for a serious editor in the sub-$1,000 price range, Vegas should definitely be on your short list.

Now that you’ve acquired Vegas from Sonic Foundry, we hope you continue to develop it. Vegas is one of the easiest editors to learn and has the best audio tools of any video app (even better than some dedicated audio tools). The user interface is simple and clean. We like the integrated file explorer and the free-form track structure. Zooming in and out on the timeline with the mouse wheel is a brilliantly simple idea, as is creating crossfades by overlapping clips. We also like the advanced and extensive shortcut keys and modifiers. There’s more we could say, but our point is that we like Vegas and hope that it flourishes under your care.

Vegas 4.0 looks like 3.0 (which is good) with a number of notable additions. The new color correction tools (primary and secondary) are not unlike those found in Final Cut Pro or Avid, which is a high compliment indeed. The vectorscope, waveform, histogram and parade monitors are all important professional additions that update in real time during playback, which is something even Final Cut Pro 4’s scopes don’t do. We like the before/after split of the Preview window when modifying filters, which can be output to a television in real time. It’s not a flashy feature, but the new media bin has also become much more useful and efficient. We found the clip search features to be especially useful. Vegas has also inherited many of the audio improvements we saw in ACID 4, most notably the awesome ability to animate effects using envelopes on the timeline.

DVD is hot. While most of us are happy just to be able to burn our video to DVD, many of you want to be on the cutting edge with 16:9 anamorphic widescreen video and Dolby Digital 5.1 surround sound. ACID 4.0 and now Vegas 4.0 are the first applications to offer 5.1 surround mixing and authoring at consumer prices. The implementation is spectacularly simple, provided you are ready to deal with the many technical considerations and configuration issues.


Our first caution is not a technical one, however. How good are you at audio mixing? Most videographers are not prepared to mix a stereo soundtrack. Mixing is an art that requires training, talent and the proper equipment. Perhaps you can imagine the difficulties of a 5.1 mix.


Still, if we haven’t dissuaded you (and we are quite sure we haven’t), 5.1 surround mixing is incredibly fun and cool. You may be surprised, but Videomaker Studios does not have a Dolby THX Certified mixing booth, so here’s how we used Vegas. First, our test machine had a Creative Labs Audigy sound card with six analog outputs. We connected these analog outputs to a surround amplifier and a 5.1 speaker system. Then we configured Vegas to use ASIO audio drivers and opened the Vegas surround mixer.


Our first hour was very fun and we were able to pan music and sound effects all over the room. The surround panners are very easy to use and keyframing the exact position of the sound in time was awesome. When we decided to get some work done, we ran into some barriers. Not technical barriers, mind you, but artistic barriers. First, we couldn’t pragmatically think of stuff that should pan to the rear channels. Most of our work does not involve helicopter gunships and bullets whizzing around. It was, however, a simple matter to put voices on the center channel and to realistically create the illusion of a telephone ringing in the other room. Our second serious concern was that we couldn’t be certain what our mix would sound like on other people’s surround systems. Or out of their stereos. Or out of their stereo television speakers. Or out of the little monophonic speaker on the TV in the kitchen.

Dolby Digital AC3 encoding is a rather pricey but necessary requirement for getting your mixed audio from your computer onto a DVD. Fortunately, the process is as easy as selecting a few options from the output menu. DVD Architect is a decent authoring application with most of the same features other DVD applications have: motion menus, slideshow with background music, Main Concept MPEG-2 encoder and disc burning. It does not have high-level features like subtitles, multiple angles or DLT output. DVD Architect has real-time preview of motion menus and backgrounds, which is a rare feature (iDVD3 is another example). At first, we were a bit underwhelmed with DVD Architect. There just isn’t that much to it. Then we realized: DVD authoring should always be this easy. The tight integration with Vegas and 5.1 encoding is more than enough reason to recommend this package.

We Have You Surrounded

Is Vegas the most common editor in studios around the nation? No. Is Vegas the best choice if you need to collaborate on your projects with other editors or need a line on your resume? No. Can Vegas edit 16:9, HD and 24p formats? Yes. Is the quality of the output from Vegas professional? Absolutely. Can you make gobs of money with Vegas? Yes, but that depends on you and your talent.


If you are happy with Vegas 3, you don’t necessarily need Vegas 4 (upgrade for $200). Then again, the improved media bin, audio effects automation, color correction tools and split preview window are features that are truly useful on a daily basis. If you are looking for your first serious editing application, we couldn’t be more enthusiastic about Vegas ($490). It’s feature-rich, innovative, efficient and relatively easy to use. If you are interested in creating surround sound DVDs, you have no choice: you must get Vegas+DVD today.