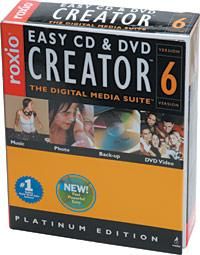 It used to be that CD-burning applications burned CDs. And they still do, but each new version has more and more features until, finally, CD burning seems to be only one small aspect of the total package. Roxio’s Easy CD & DVD Creator version 6 (Creator 6) is easily the most full featured disc-burning suite around. As you’d expect, we’re going to approach this product from the perspective of the video-enthusiast.

The minimum installation size for Creator 6 is 271MB, which is more than double what Nero 6 requires. The full package is around 815MB, about a quarter of which is DVD menu templates. Installation was easy, but required a reboot. We then were prompted to automatically install four minor updates (total of 4.27MB), which we did.

The basic program launcher is much simpler than Nero 6 and sports only five large, friendly buttons with no submenus. Although we don’t really like the floating toolbar that never goes away, we were immediately copying and compiling discs without hesitation. Perhaps our only complaint about the main burning workspace is that the file explorer pops up outside of the main application, opening yet another window on our desktop.

We like the Drag-to-Disc module (the app formerly known as DirectCD) that will automatically record files to a recordable disc without any thought at all. As the name suggests, all you need to do is drag your files and drop them into the little app and you are done. Creator leaves the disc open, so you can basically use the disc like a floppy drive until it is full and then finalize it. Drag-to-Disc also works with rewritable formats.

We didn’t discover any important technical limitations when using Creator 6, for example, the app had no trouble burning data from across our network.

One really cool feature for videographers was the ability to span large projects (and even single files) across multiple discs. To test this, we threw a 2.5GB video file (*.avi) into a CD-R project. Creator 6 automatically set the project up to span multiple discs. Creator 6 adds a special Windows executable (retrieve.exe) that will allow any Wintel computer to successfully extract the archive from the spanned discs. Simple, flawless and impressive.

Obviously, the primary reason why you’d buy Easy CD & DVD Creator is to burn discs, and it does that well. You’ll also notice that we’ve paired the review in this issue with our review of Nero 6, which is the main competitor for this product. But we were surprised to see that we almost could have compared Roxio’s package to Apple’s iLife suite. As Roxio marketing states, Creator 6 is a "Digital Media Suite" and combines digital audio library management and playback tools (iTunes), digital image organization and enhancement (iPhoto), video capture (iMovie) and DVD authoring (iDVD). While the Mac iLife suite is certainly the better package for these tasks overall, Roxio’s app is certainly much better at disc burning than the Apple product. And it isn’t too shabby in the other categories either.

DVD Builder is a basic DVD authoring app that captures video and allows simple trimming of clips. Some tasks were not as easy as they could have been, such as setting the thumbnail image for a button, and we didn’t have total freedom to customize the disc, but in the end we were able to produce an attractive DVD in very short period of time. Although the file browser again popped up in another window, the visual layout made finding media easy. Roxio includes a number of coordinated templates with animated backgrounds.

Roxio uses the Ligos encoder to create MPEG-2 video for disc. Like Nero 6, Creator 6 can also capture, encode and burn video from your camcorder straight to DVD+RW discs (otherwise known as DVD+VR when used this way), provided your computer is muscular enough, roughly a 1.6GHz CPU. We had no trouble creating discs this way on our HP 300i drive using 4x Verbatim media. When finalized, these discs played back just fine in standalone living room DVD players.

Creator 6 includes a decent Help file, a nice tutorial and an almost 400-page printed manual with the boxed version ($100), which is a good thing since there is so much more to Creator 6 than burning discs. Although not reviewed in detail here, the photo editing/organizing and music management tools performed the basics well. And the best part is that the fundamental disc burning tools have not suffered as a result of being incorporated into the suite.

Everyone needs a disc burning app. If you only occasionally burn a data disc for backup or sometimes copy a CD for a friend (we know you do), you may be perfectly happy with the one that came with your computer or new disc-burner drive. But if you are finding your freebee app to be substandard or limiting or simply crashy, then you need to buy a real burning app. Combining no-nonsense burning tools, top notch technology and a suite of media management tool, Roxio Easy CD & DVD Creator 6 is the obvious choice for home videographers and digital media hobbyists.

Roxio’s media suite is loaded with features, but not at the expense of it’s core competency: burning discs.