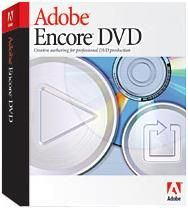 We knew Adobe would get into the DVD authoring game before too long. The time is now. While Encore DVD was not shipping at press time, Adobe gave us a sneak peak of a late-beta version in time for us to give you this preview.

Adobe is clearly targeting the professional videographer with Encore. There are no menu wizards, for example, and the blank interface will leave novices baffled as to where to begin. The user interface (UI) is clean and has a lot of open space. NOTE: Just before press time we received a gold version of Encore. After extensive testing, we found it to be fairly stable, with good error trapping, although it had a couple of first-generation quirks (including a feature that worked in beta, but not in the gold version). These sorts of issues are not unusual in first generation products. Overall, the UI is simple, but its strength comes from integration with Adobe Photoshop.

We’ve seen some use of Photoshop files (*.psd) in DVD design by Apple and Sonic, but Encore has the tightest integration we’ve seen so far. The advantage is that you can have your artist-in-residence design your DVD layout using Photoshop and then hand those files off to a dedicated DVD-techie to create the actual disc. Photoshop layers, when properly named, automatically act as buttons and overlay graphics. But this isn’t a one-way street. From within Encore, the text layers remain editable, which means that you don’t need to drop out of Encore and back into Photoshop to change text. In reality, Encore menus are Photoshop files.


But there are some very good reasons to use Photoshop for your menus. For example, all Photoshop filters and effects are rendered within Encore. So if you create a custom semi-transparent-monochrome-sepia filter on all of your buttons, when you change your button images to a motion buttons in Encore (based on your video clips), the filter is automatically applied to the video. One downside is that your motion menus will not preview until you render them. Photoshop’s undo history is even available in Encore.

One important feature is integrated transcoding of any video file of the proper size and frame rate. Here are a few other highlights that we think professionals will look for: link checking, DVD-9 support, DLT output, copy protection (when supported by your output format: CGMS, CSS and Macrovision), DVD-ROM content, multiple language tracks and simple subtitle editing.

We’re not sure Encore will have much of an impact in the consumer space. It is easy to use, but it is not very easy to learn. The total integration with Encore may make this the killer DVD authoring app for many production houses.

Tight integration with Photoshop may make this the DVD authoring app of choice for digital artists.