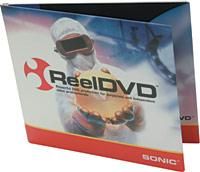 We didn’t find any perfect sub-$1,000 DVD authoring applications this year. Some programs lacked vital features and some produced strangely incompatible discs. Sonic’s ReelDVD (acquired from Daikin), however, came pretty danged close to perfection, certainly closer than anything else. With a comprehensive feature set and solid compatibility, ReelDVD is the only authoring application a serious professional will ever need. Perhaps most surprisingly (although it shouldn’t be), ReelDVD is also very usable.

DVD authoring is not as complex as video editing. Where editing is almost infinitely complex, DVDs have a limited set of very standardized features. It is easy for us to judge completeness by assessing how well an application supports these standards. ReelDVD supports such necessary features as DLT output, AC3 audio encoding and multiple audio streams. ReelDVD also supports many features we’ve seen in other applications (e.g. motion menus), but it also has some nice extras you might not use in every project. For example, the subtitle editor is brainlessly easy to use. ReelDVD also allows you to superimpose menus and buttons over your movie while it plays back. The only capability we really missed in this application was the ability to create dual-layer 8.5GB DVD-9 discs, which, when combined with DLT output, would allow the user to create true Hollywood DVDs through a dupe house. If ReelDVD had that feature, however, there wouldn’t really be any reason to buy Sonic Scenarist.

ReelDVD has the features we need, but in our quest for perfection, we’ve often noticed a nasty trend: the more professional an application gets, the harder it becomes to use. We generously figure this is probably unintentional, but it also makes us wonder if there isn’t some sort of conspiracy to maintain a priesthood of experts. Considering the limited and standardized feature set, DVD authoring really shouldn’t be that complex. ReelDVD is not easy to use, in the sense that you can’t just pick it up and automatically create a DVD in just a few minutes (Sonic’s MyDVD does that very well). It is, however, very well designed and usable. The color-coded storyboard must be learned, but it is a very powerful tool. The flowchart layout and track sorting tools are eminently usable and useful. We created individual buttons, menu items and chapters with drag-and-drop ease. The various links are colorfully and graphically displayed on an extensive flowchart that was very readable, even for very complex interactive projects. The short-but-dense 140-page printed manual covers only the basics, but the CD-ROM tutorial (which we completed in 90 minutes) should be enough to get you up to running speed.


Our biggest problem with ReelDVD was that nothing can be undone. If you do something you didn’t want to do, you’ll have to undo it manually. It might even be difficult to figure out what needs to be undone. And, worst of all, if you accidentally delete a complexly linked menu, you will need to recreate the entire menu from scratch.

The fact that ReelDVD is usable does not mean it is for novices. You will need to master arcane technological concepts such as MPEG-2 encoding and, indeed, you will need to have your own encoder, since ReelDVD does not include one. Some kind of basic understanding of Photoshop layers might be nice as well. And you’ll need to at least know what multiplexing is and what defines proper DVD audio. These are all topics that DVD professionals must understand. Still, ReelDVD handled very well, automatically encoding audio to stereo Dolby Digital, multiplexing the tracks and even creating automatic slideshows of still images. It accepted a wide variety of correctly encoded MPEG video from Main Concept (used by Adobe, Sonic Foundry and Ulead, among others), Canopus and TMPGenc. When we intentionally threw invalid media at it, for example 32kHz audio files, the error messages we received were clear and unambiguous.


In a different situation, ReelDVD generated clear and useful error messages when we tried to import a Photoshop PSD menu file that the program didn’t like. ReelDVD only works on Windows 2000 and Windows XP Pro (and not on XP Home).

If you need to produce professional DVDs on a PC and you don’t have the budget for the Hollywood-level Sonic Scenarist, ReelDVD is exactly what you need. But, to be perfectly clear, it is not the only app you need.


ReelDVD will multiplex and compile your DVD and even encode your audio, but it will not encode your video, so you’ll need to get an app that specializes in MPEG-2 encoding. Again, we do not feel that this is a weakness and are happy to see Sonic concentrate on the disc. Although the bugs concern us, they were not random, suggesting that the application is stable overall. We certainly would not let these bugs dissuade you from an otherwise excellent, nearly perfect, program. ReelDVD offers a very full feature set in a remarkably usable application that produces the most compatible discs possible.