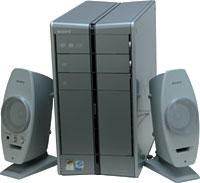 Sometimes we review complex workstations for professionals, such as the Laird/Avid system featured in this issue. Sometimes we review more friendly machines, such as the eMac and iMac (April 2003). More and more, however, we are finding that even consumer-friendly computers are powerful enough for professional work. Designed for consumers who want to create DVDs at home, the Sony VAIO Digital Studio PCV-RZ24G editing computer fits this category.

The RZ24G is a stylish machine in silver and gray with a coordinated Sony-branded keyboard and mouse. Inside the box, we found a reasonably muscular machine running Windows XP Home. We liked the GeForce4 dual-monitor display card, although we didn’t find a DVI to VGA adapter included in the box. The computer also has S-video out, which was definitely a nice feature for viewing television and video, but did not display previews during editing.

This computer has a single hard disk drive (HDD). In the Bad Old Days (just a few years ago), a second dedicated HDD was a necessity. While we’d still recommend it, we have to admit that during our tests of this machine, we experienced no dropped frames during extended captures to the RZ24G’s 120GB 7,200 rpm HDD. A 120GB drive provides an awful lot of space, certainly enough for six hours of DV footage.

We captured DV video (through both the front and rear FireWire ports) and performed simple edits using Sony’s DVgate motion software. For more advanced editing, Adobe Premiere 6 LE is included. This will certainly whet your appetite for frame-accurate editing and more complex compositing, but this machine was not really designed with the professional video editor in mind. The automatic movie editing of MovieShaker is another fun indication of the audience for this VAIO.

Besides capturing DV footage, the RZ24G also has two S-video inputs for analog capture, one in the rear and one in front. Analog footage can only be captured using Sony’s Giga Video recording software and is captured to a proprietary format that is almost certainly a variant of MPEG-2. Unfortunately, you do need to dance a little two-step to get this footage into your editor by first converting it to DV AVI files using the Giga Explorer application.

Let Us Entertain You

The feature set of the RZ24G indicates that Sony intended this machine for the living room, not the office. It includes some features you might not expect to find on a typical editing computer. For example, it runs exceptionally quietly (good for both the living room and the edit suite) and even comes with a full-featured remote control. The analog and television recording features enhance television viewing by turning your computer into a TiVo or ReplayTV-style digital video recorder (DVR). In summary, this allows you to use your computer to replace your VCR for recording TV shows and, more interestingly, to pause live television. This may sound uninteresting, but we have to say that this will truly transform your television viewing experience. The software was not as polished as TiVo or ReplayTV, but it did work.

Perhaps the best feature of this VAIO for videographers is that it is DVD-format agnostic and can burn both DVD-R/RW discs and DVD+R/RW discs. We first tried Sony’s Click to DVD software in Automatic Mode. This involved connecting our DV camcorder, running the software and clicking the “Create DVD” button. The software first scanned the tape in fast-forward mode to determine the duration of the video on the tape, then it captured the entire tape to disc, breaking the movie up into separate files using scene detection.

One problem with this software was that it relied on the time code, which meant that it did not capture the entire tape if it encountered a break in the time code. Alternately, if you only had 20 minutes of content on a DV tape that you blacked (i.e. recorded time code over the whole tape), the app would capture the full 60-minute duration of the tape, 40 minutes of it black.

Encoding happened in a separate step, but was still automatic. Finally, the software burned the video and menus to a DVD, in our case a Verbatim DVD+RW disc. Click to DVD divided the video into 10-minute chapters, represented as thumbnails on the attractive templates (with beautiful motion backgrounds) provided by Sony. The entire process took over 3 hours for our 60-minute DVD and it really was one-click easy, despite the time code problems we encountered with some tapes.

While the RZ24G has decent specs and performance, this is not a machine designed for a professional studio. Instead, the many simple media tools, television tuner, remote control and DVR functions all indicate that this is a family-friendly machine. This is not a criticism and there is no compromise in quality, since the captured DV video is the same as the DV video captured on a professional workstation. We would have been happier if we could have also worked as effectively with captured analog video, but we haven’t seen an easier way to get digital video onto DVD discs (short of buying a standalone living room DVD recorder). This VAIO is definitely an option if you want to stick with a Windows machine, but are understandably jealous of all the fun your Mac friends are having.