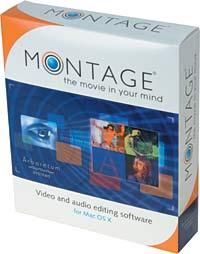 When Arboretum announced the release of Montage, a much needed editing alternative for Mac users, we were very excited. Arboretum is an award winning audio software company that has made a name for itself with audio effects processors like Raygun and Hyperprism, used by artists like Charlie Clouser (keyboardist for Nine Inch Nails) and Thomas Dolby. Montage sells for $149 and is for the casual editor who wants more than Apple’s iMovie offers, but who is not quite ready to shell out $299 for Final Cut Express (or $999 for Final Cut Pro).

Unlike traditional video editing software packages, Montage has an innovative trackless workspace that allows the free manipulation of video, audio, stills and text in an infinitely expandable window. Mac users are no strangers to innovations or to quality interface design, especially those of us that can remember drooling over interfaces from Kai Kruase, the guru behind programs such as Bryce, Poser and Carrara (reviewed in the June 2003 issue). These are non-standard interfaces that often look very cool. The downside is that users will need to learn to navigate largely from scratch.

Dragging and dropping media into the workspace is incredibly easy and actually, dare we say, fun. Just drag a QuickTime movie or audio file into the workspace and viola, it is ready to edit. Montage imported just about any file format we threw at it: JPEG, PSD, PDF – no problem. To our delight, it even handled MPEG-4 video files with ease.


Montage’s capture window is straightforward and has large and friendly VCR-style buttons. The program easily controls and captures video from a DV camcorder via FireWire. During capture, you can monitor your video with a vectorscope, waveform, histogram or compressed video signal information. This is a very nice (and fairly advanced) feature that Apple’s iMovie doesn’t have.


While capturing video is as simple as clicking a button, it does not have a batch capture feature. Also curiously missing is any sort of media bin: all captured media clips are placed directly in the main workspace window. You may like this, you may not.

The trackless workspace (that also serves as your media bin) is where you’ll execute all of your trimming, editing and effects. Want to have a cross dissolve between two clips? Simply overlap them in the workspace. You can arrange video and audio clips freely anyway you like. It’s a bit like arranging word magnets on a refrigerator door. Our first impression was that this added freedom to the editing process, but as our workspace got a little cluttered, we thought it would have been more organized if we had distinct video and audio tracks to work with, as well as a bin. Fortunately the workspace does have a snap-to-grid option and the Montage manual does mention that they will add a media bin in a future release.

You apply transitions and filters by selecting a clip and then choosing an effect from a pull down menu. There are about 14 included video effects and a bunch of audio effects. There are no previews to the video effects so you have to try them out to get a feel for each one. The Lens Flare and Film Noise filters were definite crowd pleasers.


Arboretum has a prestigious reputation from its audio processing software, so its no wonder that this is where Montage excels. Many of the professional quality filters that have made Arboretum famous are included, borrowed from the award winning Hyperprism and Raygun packages. Montage also includes a 64-channel audio mixer with level, pan, solo and mute controls.

As an iMovie alternative, Montage simply falls short at the time of this review. iMovie 3 has more features, and is more intuitive, but part of that may be because iMovie has a more traditional and familiar workspace. And, more importantly, iMovie 3 was far more stable on our Mirrored Door Dual-G4 test machine. We also found that the manual refers to features that are not included in the software.


Another eyebrow raiser is that when you want to see your Montage movie on TV or output a project to tape, you need to save it to a QuickTime movie, import it into iMovie and then export it to your DV camera. In all fairness to Arboretum, this is only a minor inconvenience and the Web site does point out that Montage is an initial release. As it is, we are excited about the future of this software, but only lukewarm about this initial release.

Give Montage a Listen

The seamless integration of iMovie into the $50 iLife package (which includes digital photo management, audio organizing and DVD authoring tools) makes it an uphill battle for Montage to win over iMovie converts. And the $299 Final Cut Express narrows Montage’s niche even more. Audio hobbyists are the real winners here. The Raygun audio cleanup filters and 10 Hyperprism effects definitely make Montage a good value. Of course these packages are also available as stand-alone apps or as plug-ins for supporting programs, but at a price (Raygun alone is $99). Arboretum has a free limited version of Montage you can download from their Web site, and it’s worth a try. The future is very bright for this package and we look forward to seeing a more mature version in the not too distant future.

SUMMARY
The initial release of Montage is less than perfect, but the future of this innovative product is promising.