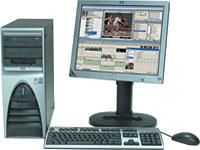 A few years ago, the average general-purpose computer was not able to handle the demands of video editing. Although the HP xw4000 workstation is a general-purpose machine, it has more than enough muscle for video and could be a solid foundation for any studio. It’s not a feature-rich machine in its base configuration, but it is a no-nonsense performer ready to be customized by editors who know what they need.

The xw4000 we tested was a powerful but unremarkable machine, with an Intel P4 2.8GHz CPU, 512MB RAM and an 80GB 7,200rpm hard drive in a mid-tower case. Although the machine runs Windows XP Pro, the re-branded/merged Compaq computer (Compaq motherboard, Compaq desktop wallpaper) does not come with an original WinXP Pro installation disc, substituting an HP recovery disc instead. The xw4000 we received had FireWire for DV video in/out, including a convenient front-mounted port.


For testing purposes, we installed Adobe Premiere 6.5 and Sonic ReelDVD 3.0 (our machine was sent to us with Adobe Premiere 6.0 installed). Premiere was well-behaved and responsive in our tests. We captured, edited and output video to DV tape without any problems. We would have liked to have seen a separate, dedicated video hard disk, but the single drive was sufficiently fast for 25Mbps DV video. In Videomaker‘s real-world encoding benchmark (see sidebar), the xw4000 rendered a respectable average of 16.00 frames of MPEG-2 video per second. Sonic ReelDVD also worked well and was completely compatible with this machine.


The installed NVIDIA Quadro4 display card is a professional graphics card optimized for OpenGL, CAD and 3D modeling applications but provides little or no measurable performance advantages for video editing (although it doesn’t hurt either). The dual-head card, controlled by NVIDIA’s excellent nView display management software, elegantly spanned Windows and Premiere across two monitors. Interestingly, although our system came sans speakers, the front-mounted speaker in the case does more than just "beep." It is connected to the onboard sound card and can play back monophonic audio. Clearly this is not sufficient for mixing audio, but it is a convenient feature. You’ll need to add speakers before editing.

HP offers a host of options that will allow experienced video editors to configure their dream machine. Folks less sure about their exact needs should get help or consider a company that specializes in video-editing turnkeys. Here’s what we wouldn’t change about the stock xw4000 system: