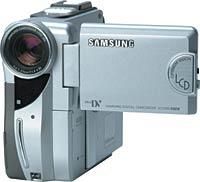 As competition between Mini DV manufacturers becomes more intense, we’re seeing more entry-level cameras with compact designs, innovative features and user-friendly controls. The Samsung SCD590 is proof that all three can coexist within one unit. This model is targeted at entry-level consumers that want an easy to use Mini DV camera that doesn’t skimp on the design, supplied features or image quality.

The SCD590 makes a good first impression upon taking it out of the box with its compact form factor and a modern-looking silver casing. The left side of the camera has a flip out 2.5" LCD screen that is large for a camera of this size. The right side has the zoom controls and a microphone input jack. The camera mode and EZ Menu dial are located on the back.


The camera comes with accessories galore – fifteen items in all – including a slim lightweight remote control, lens hood, neck strap, hand grip (more on that later), USB Cable, 8MB Memory Stick (for 640×480 stills) and software. Power up the SCD590 and you’re greeted with a very friendly videogame-type beep as the playback controls light up in a brilliant blue. Press the EZ dial to access the on screen menus, which use a file and folder hierarchy similar to a computer and were very easy to navigate once we got the hang of it.

The image quality was great and colors were crisp and vibrant, especially in outdoor shooting conditions where there’s plenty of light. Indoor shoots didn’t fare as well: like most cameras with tiny optics and small CCDs, it yearned for plenty of light to produce good results. The manual features are adequate, lacking only explicit iris (aperture) control in favor of a combined Exposure adjustment, and are only one menu level deep. The relatively small number of buttons will prevent the beginner from being overwhelmed. We liked the Custom button, which allows you to save a preset cluster of settings for instant access. This consumer camera has a typical handful of in-camera digital effects, including a color pass filter that we actually found to be pretty fun. You can allow red, green, blue or yellow to pass through, with the rest of the image desaturated to black and white. For example, you could have an artsy black and white scene with only the red roses appearing in color.


The auto focus feature worked well and did a good job of tracking the main objects in a scene. Panning and zooming movements didn’t fool it as much as expected. The SCD590 did a good job of adjusting to keep the subject in focus. The electronic image stabilization worked like a charm and recorded a steady shot while putting the camera through its paces.


The SCD590’s internal microphone, which is located at the top of the camera and a bit far back, was very sensitive and picked up a wide range of sound. In fact, it worked too well. We were very pleased to see an external microphone jack because the built-in microphone also picked up a slight buzz from the camcorder mechanics while recording.

A Shoot in the Dark

One of the coolest features on this camera is the Nite Pix mode. Like the IR night modes on other cameras, this allows you to shoot in a pitch-black environment. We tested this feature in a dark storage closet where our normal vision saw nothing, but we were able to use the Nite Pix feature to look around and read labels on containers, fidget with the breaker box, and find the door with no problem. This isn’t a professional feature, but the green-tinted video possibilities are limited only to your imagination (and you can get rid of the green hue by changing the footage to black and white in post).

The included hand grip adapter is the weakest feature of the camera and adds bulkiness to an otherwise slim device. While it is detachable, the grip is almost a required accessory for comfortable shooting. It screws into the tripod mount at the bottom of the camera, so you need to remove it to attach the camera to a tripod. Further, the bottom-loading tape mechanism is blocked by the hand grip, so you’ll need to loosen it and swing it out of the way to change tapes. The handgrip felt awkward, but it is not an unreasonable compromise, however, between the far too small piece of pinkie-plastic on the early ultra-small camcorders and the full-sized grip on a much larger camera. The handgrip really got the thumbs down when we realized we could no longer fit the diminutive SCD590 in our pants pocket, thus compromising its compactness. The battery also sticks out from the side of the camera, detracting from its svelte appearance. With the battery and hand grip, the SCD590 ends up being a bit bulkier than the JVC GR-DVP7.

The Samsung SCD590 is a good blend of features, performance and design. The user-friendly sounds were a big plus and made operation of the camera fun and enjoyable. Aside from the bulky handgrip and battery, Samsung produced a decent camera that it sure to please the novice to intermediate enthusiast.