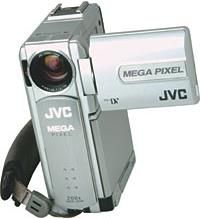 Can a stylish camera that’s smaller than a can of soda be more than just a showpiece on your digital gear shelf? You betcha! The beauty of the JVC GR-DVP7 isn’t only skin deep, as it has plenty of automatic, manual and some Internet functions to keep the novice to intermediate videographer busy. A built in megapixel digital camera is included, along with an 8MB SD (Secure Digital) Memory Card and a USB connection to store and transfer digital photos. If you’re looking for a compact, ultra slim Mini DV camcorder that can fit in your pocket but still has all the bells and whistles, then the GR-DVP7 is worth a close look.

The GR-DVP7 has smooth lines with a titanium silver casing and hardly any extruding parts. The silver finish gives it a modern look and is aesthetically pleasing so hopefully you won’t mind a little attention on your next shoot; it’s bound to turn a few heads when you whip it out of your pocket.

The main controls are laid out in a circular jog shuttle type interface that includes the mode select, record button and zoom, allowing effective control of the camera with just the thumb. The zoom dial also doubles as a shuttle and search control when in playback mode. Located below and to the right of the main controls is a snapshot button that is awkwardly located for right-handed shooters because of the angle you have to bend your thumb to depress the small button. Left-handed shooters will have an easier time reaching and operating it.

Because of the DVP7’s small size, you grip the camera by wrapping four fingers around the front of it with your thumb resting on the main controls in the back. Unfortunately, folks with large hands will have to pay special attention to keep their index finger from ending up in the shot or on the lens. During our review, we frequently noticed fingerprints on the lens, even though we didn’t realized we had touched it.

The automatic focus worked like a charm and produced a solid picture within a reasonable amount of time. For tough autofocus situations, like when two subjects overlap the same scene, the camera will automatically zip to the correct focus. If this doesn’t produce the desired result, the manual focus button is easily within reach of the right index finger, allowing you to quickly make manual adjustments via + and – buttons.

Zooming is possible up to 10x magnification in the optical mode, which is decent for such a tiny camera. The variable zoom speed was easy to operate with the jog/shuttle control that your thumb rests on. A slight push from the center produced a slow zoom that was exceptionally smooth.

The microphone, flush against the top of the camcorder’s body, was surprisingly sensitive and did a good job of picking up clear crisp sound. With the drive mechanism and focus motor being rather noisy, there were some unwanted noises slightly audible during playback. Some noise might be inevitable on micro-cameras like this. Unfortunately, there’s also no microphone input jack to plug in an external mike, which would have allowed us to remedy this situation.

We liked the sliding silver panel used to cover the lens, as it effectively eliminates dangling or lost lens caps. However, it also means that you cannot screw filters or attachments into the lens.

The image quality of the DVP7 was above average producing crisp pictures in good lighting conditions. The megapixel camera also produced acceptable still pictures (1,280×960) and may eliminate the need for a separate digital camera, especially if most of your photos end up on the Web.

One area of the camera that could use a little improvement is the viewfinder picture itself. It was rather pixilated giving the feeling as if you were looking at your image from behind a screen door. Of course you will probably end up using the LCD most of the time, which was one of the smallest we’ve seen.

A likable feature of the DVP7 is the ability to create an MPEG-4 email movie. This is a reduced size video clip that is saved as an .asf file for playback within the Windows Media Player. Clips are transferred to your computer via the supplied USB cable and sent off as email attachments. Even more intriguing was the ability to use the camera as a WebCam, with live streaming video broadcast on the Internet via the USB cable.

Finally, the 8MB SD memory card on the camera can store MP3 sound files, which by default are used for silly (but fun) sound effects you can add to your video while you shoot. Theoretically, if you had a larger memory card, you could use this camera as an MP3 player. When connected to a computer, the memory card shows up as a removable drive, so you can even use the GR-DVP7 as a mobile disk drive.

If a Mini DV camera with a small form factor and styling that James Bond would be envious of serves your purposes, then look no further: the DVP7 delivers. The Internet capabilities will satisfy the gadget freak in you while also taking good pictures, both motion and still. Since this camera wasn’t designed for serious production work, it’s natural that it falls a little short in that area. The lack of an external microphone jack is unfortunate, and would add a lot to this camera, but, on a positive note, it does have a hot shoe and headphone jack. The GR-DVP7 works beautifully as a second camera for pick-up shots or as the main camera for the beginning and intermediate videographer. As a take-anywhere vacation camera, the GR-DVP7 is a solid winner.