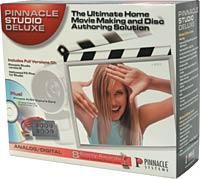 We liked the $100 Studio 7 software from Pinnacle. The Studio 8 Deluxe version ($300) deserves another look, not just for adding a "1" to the version, but because of added hardware features like analog video/audio inputs and outputs, an extended breakout box and a FireWire port. This is a complete production package for anyone ready to upgrade their computer for video. Although it is certainly accessible to beginners, the depth of features in this package is impressive and may be all that a home videographer will ever need.

Editing video is a complex task even before you get to the actual editing. In the waning moments of the last century, hard disk space was at a premium and video editors painstakingly captured only the scenes they needed from tape. Typically, this meant that it took a minimum of two hours to get the footage from one DV tape onto your computer. Now that standard hard disks can hold a few hours of DV (one hour = 13 GB), Studio 8 has a number of alternate options. First, if space is still tight, you might consider capturing a fast preview of the entire tape and then go back and visually select the scenes and takes that you want. Second, you could use the fast preview as an off-line editor of sorts, editing using the low-quality preview files and then allowing Studio to capture only what it needs to create the final movie later (also a much touted feature of Final Cut Pro). Option three: capture the whole tape at full quality and let Studio break it up into scenes for you. Studio arranges clips visually in the Album, even though the actual media is in one large file. Studio encodes video to any format on the fly; so you can capture S-video input to DV or MPEG or even capture DV straight to DVD-ready MPEG-2.

Storyboards are a great way to rapidly arrange your movie without worrying about exact timings. In many situations where frame-accurate timing is not necessary, a storyboard view is all you need. Studio 8’s storyboard is easy to use, but the program also offers a timeline view. The timeline offers only a couple of tracks, mainly for title overlays, but Studio 8 isn’t targeted at folks who want to do extensive compositing anyhow.

The audio tools are a particularly good example of the simple effectiveness of Studio. The included SmartSound feature (adapted from SonicDesktop’s fine software) lets you create a custom soundtrack for your video. Studio also lets users copy (rip) music from CDs. There are a couple of audio tracks on the timeline that you can use however you like. It is easy to precisely time audio clips, and to vary the volume of a track over time using standard envelopes to fade or duck the music under narration. We really liked using the audio faders in the mixer while previewing the project, with our changes automatically recorded. This is a feature that we wish our favorite "advanced" editors would copy. We did experience some crashes in our tests when dragging audio around to various tracks. These crashes were consistently repeatable, and they were serious enough to cause WinXP to spontaneously reboot.

Exporting your movie to a DV camcorder via the FireWire port is easy enough. Sending analog out to a VCR or television is equally easy. Studio 8 also has an Internet option that encodes your video to RealVideo and Windows Streaming Media formats and even offers about five minutes of storage space on Pinnacle’s streaming Web server. Finally, Studio can be used to author, encode and burn discs such as DVDs. Disc authoring is a template-drive affair integrated into the editing process, occurring directly on the editing timeline. We’re not sure we like authoring nonlinear DVDs on a linear timeline (similar to Pinnacle’s advanced Impression Pro DVD software), but it wasn’t hard to learn. You can set first-play items by placing the first menu after them. Motion menus (but not backgrounds) can easily be created, but not previewed. In one authoring mode, you can drag chapter points and menus to a visual representation of the menu and the buttons. We had no troubles encoding and burning our 39-minute DVD project to a variety of disc formats.

Enter the World of Video

If you have never edited video on a computer, this is a great package. Analog and DV inputs, solid editing, a great titler, fun FX and usable tools are all reasons to consider Studio 8. We especially liked the breakout box, which is something usually found only on more expensive cards. We are not entirely comfortable recommending that computer novices open up their towers to install hardware and drivers, although we had no problems in our tests. Make sure your computer meets the minimum requirements and make sure you are comfortable installing hardware in your case.


Also, you’ll need to install the 8.3.18 patch (or better) from Pinnacle’s Web site. The repeatable crashes we experienced do concern us, but they occurred only in peripheral areas of the program, did not affect normal editing and did not prevent us from completing any of our projects.


If you are looking to enter the world of video editing, Studio 8 is a safe choice. We think you’ll find it a satisfying and enjoyable editing package.