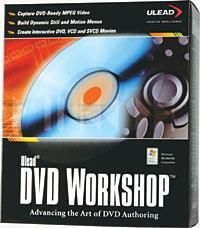 On paper, we expected Ulead DVD Workshop to be one of the better DVD authoring applications available at any price. Perhaps you are already familiar with Ulead’s impressive video editing tools, such as MediaStudio Pro, but you might not be aware that Ulead also engineers a graphics editor that can go toe-to-toe with Adobe Photoshop any day. Combining the graphics and text talents of PhotoImpact with veteran video capabilities, there was no reason to expect anything but excellence from DVD Workshop.

DVD Workshop looked a lot like Ulead VideoStudio 6. DVD authoring isn’t nearly as complex as video editing, so the simple user interface with the large preview window dominating the center of the screen worked quite well. The library (bin) on the left side allowed us to browse for media. We found the graphical browser to be fast and easy to use.


To get a video onto the DVD menu that we sought to build in the preview window, we had to first drag the video to the Time List storyboard along the bottom of the program, then drag the video to the menu. At first, we didn’t really like this extra step, but the Time List philosophy did allow us to clearly separate menu construction (fundamentally a graphical layout task) from the video content of the disc-to-be (which is about storytelling). In any case, it only took about 30 seconds to get used to this little two-step.


The DVD Workshop manual is light, but the Help is good. We especially appreciated the extensive and unusually useful pop-up ToolTips. For example, when we held the mouse cursor over a clip in the project, a ToolTip popped up with the clip’s name, its duration and even its location on the computer.

The focus of any DVD authoring app is the laying out and designing of the DVD menus and title pages. DVD Workshop really excelled in this area. While Ulead included some great templates and many attractive backgrounds and button elements, deep in our souls we wanted the freedom to create what our mind saw.


We could freely size and position all elements on a menu. The text and titling tools were top-notch. The prominent safe area and useful alignment commands (hidden on a right-click context submenu) were essential features, indispensable to good layout.


We’ve seen easier methods, however, of creating thumbnails for buttons that link to movies (for example, automatically creating a thumbnail from the first non-black frame in a video).


DVD Workshop does have a solid frame-grab feature that we used to save a JPEG still (of any frame) to the library, which we then dragged to a menu to create a button. The frame-grab utility did not always function correctly. It failed on certain video clips, which also caused video playback problems and resulted in scrambled video on encoding. Both of these problems were difficult to recreate, however, and may have been related to an interaction with a Canopus DV codec. Video that was captured using DVD Workshop itself was trouble-free.


For chapters that broke up a larger contiguous movie, it was obvious that at the end of Chapter 1, the disc would continue on to Chapter 2, just as Hollywood movies do. For a non-sequential project, such as a wedding DVD, educational disc or home video production, the end-of-chapter behavior was more important. Often, this meant returning to the menu that the video played from, but we could also send the viewer to any submenu on the disc, although it took us a while to figure out how to do this.

Adding a first-play movie to the disc was drag-and-drop simple. DVD Workshop also supports over-hyped motion menus. To create a motion menu, we only had to use a video file, instead of a still image, for a button thumbnail. The video only started playing from the beginning of the clip, so picking the part of our video that we wanted to use on the menu was not possible. Previewing motion menus took some rendering time (measured in minutes per thumbnail) and we only got a small preview. We must admit that while motion menus (and backgrounds) look clever, we have to question whether they are really necessary or even useful in most situations.

Ulead uses the now-common Main Concept encoder (also used by Adobe, Dazzle and Sonic Foundry, among others). The encoder is fast and produces high-quality video. Ulead has chosen to expose a number of important features in the encoder to the end user, including the ability to select variable bit rate (VBR) video and LCPM or MPEG-1 audio. When modifying these options, cautionary messages occasionally popped up to warn us of potential compatibility problems. If we were not interested in such details, the default encoding templates worked well, yielded excellent quality video and produced widely compatible DVDs.

Although we’ve concentrated on the most important authoring features, DVD Workshop also captured video, trimmed clips and competently burned DVDs. Of special note, the automatic slide-show-creation feature produced lovely DVDs with minimal effort from our collection of digital still images. DVD Workshop does not support DLT export at this time, which DVD duplication facilities may require; check with your dupe house to see if you need this feature.


By far, DVD Workshop’s strongest features were its graphics and text capabilities, based on the impressively pedigreed Ulead PhotoImpact graphics editor. We recommend DVD Workshop for those who use PhotoImpact as their image editor (and we’d even recommend PhotoImpact as an image editor, especially for Web work). The object-oriented graphics environment was simple to understand, and DVD Workshop was as flexible and powerful as any mid-level DVD authoring program we’ve used. Combine this with the quality of the MPEG-2 encoder and solid capture-edit-burn tools, and we had a winner all the way around.