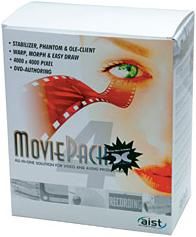 At first glance, AIST’s MoviePack eXtreme looks (more or less) like any other video editing software, and that was how we were going to review it. After an hour of use, however, we realized it was really much more than just an editor, but is instead a wide-ranging compositing and animation tool. The eXtreme suite can be acquired as a complete package or individual parts can be purchased ala cart. Because of it’s modular nature, the basic AIST editing software (MoviePack) might appeal to the beginner, while the MoviePack eXtreme suite is clearly designed for animators looking for a reasonably priced compositing tool.

The core of this package is the MoviePack editor. It had some nice features, such as scene detection during capture, a fast graphical media browser, a useful drag-and-drop storyboard mode, and a full compliment of editing and trimming tools. Although the interface is fairly conventional in its default configuration, the button layout and shortcut keys can be customized to make the app fit your personal editing style. You can see the hand of an artist in the creation of this app in small touches like guidelines that can be positioned on the preview window for alignment purposes. The entire package is well documented by a 228 page Getting Started guide and a 308 page reference text, but the highlight is the 306 full-color pages of examples and explanations that are spent on special effects. The Help doesn’t go much beyond the manual and is difficult to read with black text on a dark gray background (to match the color scheme of the app).

At first we had some trouble with our previews. We were getting real-time software previews, but they were displayed in 256 colors. After poking around in the preferences a bit, we solved that issue, but discovered the reason why as well. There are a large number of performance tweaks that advanced users can take advantage of, such as whether to use OpenGL or Direct3D for rendering 3D objects. Clearly this suite is more than just an editor. Techies will like the flexibility to tailor the application to their own hardware and editing needs, but these settings can be intimidating to the uninitiated. Do you know how well your hardware supports the OpenGL feature set? Depending on how the program was configured, it could be very fast and responsive. In certain other modes it was less so. For example, necessary hard disk caching frequently created significant pauses in the workflow.

Everything is scalable about this app. While it is self-evident that software will be faster on a faster computer, MoviePack really takes advantage of what is available, efficiently utilize multi-processor computers. Not surprisingly, we found renders to be fast on our 1 Beyond dual-AMD +1800 machine. A number of quality options are available. We felt it was worthwhile to wait for the maximum quality on final renders, although the normal render quality was excellent.

In addition to a standard timeline window, the MoviePack editor has a full-featured keyframe animation timeline called the Timegraph. Any object that can be animated (which includes many elements: track position, title color, transition progress, and so on) can be modified in this well-implemented window. Each effect can be expanded to reveal a host of keyframable parameters. This is AIST’s strength: dozens of excellent plug-ins and effects, many of which are included with eXtreme.

3DS is the file extension for 3D models created 3D Studio. We imported a number of 3DS models directly into a video track on the timeline, complete with textures. Once there, we used the Timegraph to animate the models over time. For example, we had a fighter plane dive, roll and strafe a beach scene in some vacation video we shot. Of course it wasn’t "Pearl Harbor: The Movie" quality, but it was the easiest 3D animation we’ve ever created.

The particle effects, which included sparkles, flares and bubbles, among others, were easy to configure and attractively rendered. The range of parameters that could be modified was large and included such details as gravity and wind speed. AIST’s particles are not as beautiful as some particle generators, but they are a fraction of the cost.

We tried out nearly a dozen or so other effects in the eXtreme package and found them to be uniformly easy to use and highly customizable. Many were as good in quality or better than others we’ve seen (e.g. the 3D canvas warping) while a few were still attractive, even though the quality wasn’t top shelf (e.g. the particle effects). And some are not commonly available in any other editor, such as the 3DS import, morphing or the fantastic 3D text tool. Transitions are also well covered here, with the highlight being the transition editor. If there is one obvious weakness with this product it is in the audio arena. The weak audio tools are not entirely surprising, however, considering the heavy visual and animation oriented slant of the suite.

While you might want to spring for the eXtreme package at $1,300, we’d recommend you get an AIST editor (such as the $399 MoviePack VE for intermediate users) and then purchase only the bits and pieces you need. You’ll pay more for the product if you take this piecemeal approach and purchase everything that is in eXtreme, but that is a real strength. Don’t you wish you could purchase only those parts of Windows or Office that you need instead of a giant package that includes clip art and Solitaire?