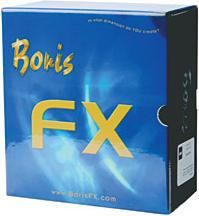 First it was transitions and then effects. Sometime after that, Boris FX evolved into a full-blown compositing application. As a standalone application, Boris FX 6.1 is a solid 2D compositor with impressive layering capabilities and deep keyframing control, but it is best used as an integrated plug-in to your compatible editing environment. Any editor who is beginning to see a need for more extensive compositing beyond simple picture-in-picture overlays and titles, or who wants ultimate control over some wild transitions, needs to check out this program.

Boris FX can be used by itself, but it is designed to plug-in to a compatible host application (see the System Requirements box). Boris FX installs in its own directory and then creates the necessary plug-in shortcuts in the appropriate directory for your host application. We installed the 20MB of Boris FX into it’s own folder and then the tiny plug-in references into the Premiere plug-in directory. We could install additional plug-in references into another application’s plug-in folder, but you can only do this one at a time and need to go back through the entire installation process (including re-entering the serial number) every time.


Once installed, Boris FX appears in the host application’s effects menus. In Premiere, we found Boris FX listed in a "3rd Party" folder on both the Transitions and the Video tab of the Effects panel. Boris effects are applied just as any standard effect, in this case by dragging the Boris FX transition to the timeline between overlapping video clips in the A and B roll or by dragging an effect directly onto a clip.

When modifying an effect, the Boris Keyframer timeline opens up. This is the same interface you’d see if you ran Boris FX as a standalone application, except that when you were finished adjusting your effect, you’d render it out as a targa (*.tga) animation file sequence. When used as a plug-in, the effect is applied directly to the clip on the timeline in your host application. This is done by clicking the inconspicuous Apply button in the lower-right corner of the Keyframer (there is no Save or Return to Host or Apply command on any of the menus to do this). You probably won’t be able to master Boris FX in a day, but the flexible and full-featured Keyframer is worth learning since the general techniques are similar to other compositing and animation applications. The 604-page manual with tutorials was good. We liked the context-sensitive Intelligent Assistant Help system (www.intelligentassistance.com) and accompanying tutorial movies, but search abilities were limited.


The Keyframer itself lists the dozens of keyframable effects parameters in hierarchical tracks. One very convenient command hides all keyframe tracks that are not used in the animation, which cleans up the workspace instantly. Boris FX is very responsive and agile, much more so than After Effects, and the preview window immediately shows the results of your changes. When you want to play an effect back, the first pass through the entire sequence is frame by frame as the preview is rendered to RAM; the next pass is previewed at full speed (but at reduced size and quality). In our tests on a 1 Beyond dual-AMD 1800+ system, the first frame-by-frame preview render took about 4x the duration of the clip for a particle effect. Once we returned to Premiere’s timeline, the red render bar indicated that the effect was ready for a final render, using the project’s default render settings. The actual render itself took 33x the duration of the effect. The combination and complexity of the effects used on any clip will of course determine specific render times. We could view rendered effects from RAM previews on an external television monitor, which is a critically important feature.

Boris transitions are some of the best around, and the keyframable parameters make this the only application you’ll ever need for transitions, but we wanted to explore the compositing and animation capabilities in more detail. We were excited to try out the Snow effect in Boris, specifically to compare it to the cool DigiEffects Delirium Snow effect (plugged into After Effects ) that we reviewed in our September 2002 issue. Both produced attractive snow with many of the same variables, such as wind speed, with a slight subjective preference for the Delirium snow. Both could also be set to accumulate and pile up on the alpha channel of an image. Because Boris FX is generally more responsive and the Keyframer is more spacious than Delirium in After Effects, we found it to be easier to work with and faster on previews. In a strange twist, Boris FX also supports a large number of 3rd party effects plug-ins, such as DigiEffects Delirium. In fact, Delirium was more responsive and easier to use as a plug-in in Boris FX (which was in turn a plug-in in Premiere) than it was in After Effects.


Boris particle effects and transitions have always been a hit and they remain eye-poppingly fun in this version. In a less glamorous but more important roll, we were very impressed with the alpha channel and matte creation tools, which we found to be functional, powerful and, thanks at least in part to the excellent explanations in the manual, easy to use.

We really can’t help comparing Boris FX to After Effects, although the two are different beasts and not strict competitors. Boris FX is no substitute for the industry standard compositing tool from Adobe, but when your needs match Boris FX’s feature set, Boris FX is easier to use, more responsive and more accessible to the average editor than After Effects.

Trial Version: unlimited (will not render)