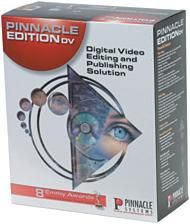 In consumer circles, Pinnacle Systems has been known primarily as a hardware company. Through a symbiotic relationship with Adobe, Pinnacle hardware has included Premiere in OEM deals for years. Additionally, Pinnacle’s TitleDeko was packaged with Premiere. All of that will change with the release of Pinnacle Edition DV, a direct competitor to Adobe Premiere. Derived from Fast Studio DV3 (Pinnacle acquired Fast not long ago), Edition should be considered by anyone ready to upgrade from a novice-level editing application or anyone prepared to chuck an old editor, for whatever reason.

Bad news first: Edition uses a completely non-standard user interface. There are no menus or standard toolbars. We try not to be unreasonable about following standards, but we already know how to close and minimize Windows applications. We had to learn how to do these two basic functions with Edition. Not that it was hard, just different. Edition, more or less, took over Windows, imposing its own color scheme (gray) on the entire system as long as it was running. The interface metaphor is a Windows-style Taskbar and Start Menu that, in the words of the manual, "take priority over the Windows version." You may or may not like this.

The good news: the user interface is extremely well designed. We especially liked the Keyboard Properties dialog, which allowed us to drag-and-drop commands onto a visual representation of our keyboard to create shortcut keys. This may make switching from a competitor’s product much more attractive. Effects and transition dialogs were clear and easy to use. Better still, we could maximize them to fill the screen, which made modifications and complex keyframe animations much easier. Although most editing applications could benefit from a multi-monitor setup, Edition was particularly comfortable when we stretched it over two screens via a Matrox G550 display card.

It took a while to learn how to capture video in Edition. We couldn’t just click the Record button and grab some video from our camcorder. There is a reason for this: Edition has very sophisticated media management tools that function correctly only if the application has the correct information for its database. Now that huge hard disks are commonplace, video projects often contain hundreds of individual media files, and media management has quickly become critical. Once we understood how the capture worked, we appreciated the Batch Capture features and were impressed with the implementation of scene detection, which let us break up video files by time code and insert break markers into a single large file.

Edition DV comes with a proprietary Pinnacle IEEE 1394 card (based on a TI chipset). Pinnacle suggests that the card "should work alongside other 1394 hardware," but in our tests, Edition did not work well with others, specifically a Canopus DVStorm card. While we had device control, video would not display in any of the Edition preview windows (even in the editor) and we could not capture video. The card did work well when installed next to a Pinnacle Pro-ONE card.

Edition’s workflow was smooth and efficient. We could drag-and-drop video clips to the Edition pseudo-desktop for rapid storyboard prototyping, which made a rough cut on the time line. The time line was fairly conventional, but offered a lot of freedom, in terms of track sizing and placement.

One of the real strengths of this program is background rendering a very rare feature, but one that we really like. When we added a transition or used an effect, and the modification was complete on the time line, Edition rendered at full-quality. For a common crossfade, renders finished in a few seconds, usually before we were ready for our next edit. More complex effects took longer, depending on the computer.

We found that a 10-second 3D spinning and scrolling title overlay took about a minute to render. This happened automatically and in the background, which meant that we could keep working while Edition did its thing. The application does not display real-time previews, however; not even in the effects dialogs. The 2D and 3D effects dialogs (modes) are very well implemented, with the various layers showing up at the same time. By clicking on the timeline, we could switch through the layers and did our compositing much as we would in a still-image editing application. We could not undo changes in these modes.

The audio aspects are also well designed, with both volume and pan envelopes and a useful mixer.

Pinnacle’s Edition promises to become an integral part of the company’s overall multimedia strategy. The Edition DV package includes TitleDeko, Hollywood FX and Pinnacle’s Impression DVD Pro 2.2. We were struck by the light manual, which barely covers 100 pages, in contrast with the 1,400 pages Apple devotes to Final Cut Pro. Technologically, Edition is competent, but it is the interface that makes it efficient. Despite it’s hijacking of Windows, any editor with a moderate amount of previous experience will quickly come to love the customize-ability and smooth workflow of this professional editing environment.