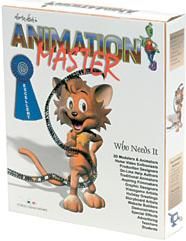 Inexpensive and relatively easy to use, Hash Animation:Master is marketed as an accessible introduction to the world of 3D animation. You should not, however, underestimate the breadth and power of this product. Full 3D modeling, rendering and animation are all a part of this package. Be warned, however: If you thought video editing was a complex and time-consuming task, just wait ’til you are hip deep in lip-syncing character animations. Animation:Master will appeal to computer-savvy folks with a dash of artistic ability and a lot of time.

The fact that Animation:Master is described as "easy to use" may be accurate when comparing it to other 3D modeling applications, but "easy" is a relative term. Make no mistake about it: 3D modeling, animating and rendering is just about the most complex activity you can do on your computer, both technically and artistically. The focus of Animation:Master is character animation, both in its marketing and documentation. Creating a virtual mascot for your show might take longer than the actual filming and editing of the entire remainder of the production, but there are easier projects that you can tackle.


Animation:Master uses a system of control points, splines and patches (bounded 2D surfaces) to define 3D objects. As beginners, we frequently created invalid patches that did not render as we intended (or as we might expect a wire frame model to render); more experience would minimize that hazard. Still, patches aren’t wireframes and, once we got used to the concept, thanks to the straightforward explanations and examples in the manual, we found patches to be quite easy to work with. They also have a number of technical advantages, notably in the areas of complexity and surface mapping.

In the Real World

Animation:Master is not meant to be a text tool for video, and it is far more complex than a dedicated 3D titling app. In fact, to build 3D text in Animation:Master, you need to type in some text and then extrude the model into 3D space. As absolute beginners at Animation:Master, modeling the word "Videomaker" took about an hour. Once we figured out the proper techniques, subsequent words took only a matter of minutes. We could output our finished animations to video files in standard AVI, MOV or TGA (image sequence) formats.


With our knowledge of video lighting, we easily positioned lights, hard and soft, just as we would for a real-world scene. We modified the properties of the text surface and specified reflectivity, specularity and so on. Animation:Master was fast and responsive to our changes.


While it certainly would be overkill to buy Animation:Master just for text and titles, this may be the perfect way to dip your toes into the ocean of 3D animation.


We next decided to see how long it would take to create a virtual studio for use with some footage shot against a chromakey wall. We created a desk, walls and geometric set pieces modeled from basic primitives. We’ve had a little experience with a few other consumer-level 3D apps and found that Animation:Master was as easy as, but not notably easier than, they were. Adding textures and arranging lighting on the set was similarly conventional. While we were impressed with the quality and look of our set, our beginner’s efforts would not have fooled anyone with their realism.

Animation:Master’s animation aspects are well integrated into the application and are, in many ways, easier to understand than the modeling. Camera moves, lighting changes and even model morphing were executed using standard keyframe animation techniques. Although we didn’t spend the time to choreograph a complete cartoon character, we did play around with an anthropoid model and appreciated the logical inverse kinematics that automatically positioned limbs with a minimum of effort. Lip-syncing a pre-existing character’s mouth was only slightly more complex than typing in a transcript of the spoken dialog and then lining up the words with the audio on a simple timeline.

We really liked Animation:Master, but videographers need to understand what this product is. It isn’t a cute little app for creating 3D titles and you aren’t going to be able to sit down and create a cartoon co-host for your show over a weekend. Think of it as a high quality set of oil paints and brushes at a fraction of the price of most other oil paint sets. Just because you own a professional artist’s kit doesn’t mean you’ll be able to create masterpieces without talent or at least a lot of practice. Being artistically challenged, we found modeling to be quite difficult. On the other hand, we were surprised with the simplicity and sophistication of the animation tools. Considering the sub-$300 price tag, this is the most accessible entry point into the world of 3D animation that we’ve ever seen. With a readable manual, third-party books and videos, and a growing and vocal user base, Hash Animation:Master, when combined with generous portions of your time and talent, may be just what you need to enter the world of 3D animation.