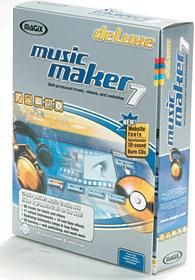 Music is an important part of most video productions. If you produce video for money, broadcast or public display, then you need either buyout music or some sort of music composition software. While there are a number to choose from, few have as many features and options as MAGIX Music Maker 7 deLuxe, and fewer still will set you back less than $75. This suite includes loop-based music tools, step-sequencers, software synths and effects, in addition to timeline video editing and mixing. Perhaps we were initially confused by the name "Music Maker," but it turns out that this product really does it all, from aural to visual.

Loop-based music is created by combining audio files from real, professionally played instruments into new compositions. Although you have quite a lot of freedom in arranging bass lines and keyboards, you are still limited by the melodies and harmonies in your loop library, but this lets non-musicians create professional-sounding songs, and it may be just what you need for your video projects. The process is not difficult, but it does require an ear for mixing and at least a modicum of creativity.


The loop-based timeline in Music Maker 7 (MM7) does a nice job with this style of composition and lets you mix video clips right in with your audio clips. The included loop files (three CDs worth) were clean and came in a wide variety of styles. Additional libraries are available from MAGIX for as little as $5 apiece when purchased in collections.

MM7 also includes a number of good-sounding software synths and drum machines with basic manual controls that were easy to program and use. The sequencers were responsive and their interfaces were clean. None of these synths offered the more advanced controls we’ve seen on higher-end software synths, but as videographers, we’ve never been able to take advantage of these controls anyhow. MM7 adheres to the DirectX plug-in standard, which means that you can use your favorite fat synth and audio effects from other vendors in your projects.

MM7 comes with all of the most basic effects you would expect, such as compression, reverb and equalization. The Freehand filter allows you to create your own effects for infinite creativity. One weakness of the audio effects is that you cannot keyframe and animate their parameters over time. By assigning effects to a bus in the Mixer, you can animate the intensity of an effect using familiar envelopes or even by recording your mouse movements.


We really liked the 3D Audio Editor, which allowed us to position sounds to our five speakers using Windows Direct3D surround and a compatible sound card. This was a very fun process, but is of limited real-world value for video producers and should not be confused with the very expensive licensing required for Dolby surround mixes for DVD.


The Karaoke effect sounded too good to be true, claiming to eliminate the vocals from music tracks using careful equalization: We couldn’t get it to work properly on any of the songs we tried.


The Song Wizard was a simple way to quickly get a rough arrangement onto the timeline, based on loop selection and a time duration, but it did not automatically create a complete song.


Perhaps our favorite effect was the impressively easy-to-use vocoder, which lets users create a voice modulation effect like those used by Daft Punk in Mitsubishi car commercials. Overall, the audio effects sounded good but were on the flashy end. For example, when we started to explore the Mixer, we found a reverb effect automatically assigned itself to the final mix. Reverb makes a mix sound bigger, but inexperienced audio engineers often overuse it, which is a virtual guarantee in MM7 since the program applies it as a default to all new projects.

Basic edits, trims and crossfades were easy to execute and MM7 has the most advanced video features of any music-centric program we’ve seen. Interestingly, all tracks are media friendly, meaning that you can mix video or audio (or still images or generated media) in any track.


The product was clearly designed with a psychedelic music video in mind, with instant chromakey buttons and effects prominently featured. As with the included audio effects, you cannot animate or keyframe any of the video effects parameters. There are also a number of kaleidoscopic background generators that you can drop on tracks behind your chromakey video. We found that these often crashed the program on our test machine, but these were well-behaved crashes that did not bring down Windows 98SE with them.


Titles were easy to create and any RTF file was acceptable, so we could have theoretically used Word or WordPad to enter and format our titles, although the included editor was adequate. We haphazardly stacked multiple layers with effects and backgrounds and found that MM7 remained very responsive and quick. The preview window always displayed our edits in real time without any problems.

Jack-of-all-trades and master of none? We’ve used more capable loop-based music tools. We’ve heard fatter software synths. We’ve clicked through better auto-generating song suites. We’ve seen better video tools. Overall though, we’ve never seen anything that does everything Music Maker 7 does, at any price. And, for $75, this is a real bargain, even if you only use a couple of the gems in this package that sparkle particularly brightly, such as the vocoder, the Direct3D surround mixer or the 3 CDs of loops. Although the filters and effects target a younger, MTV-generation crowd, more sober types should not be dissuaded from what is truly a multimedia tool with both decent timeline video editing capabilities and extensive music-composition tools.