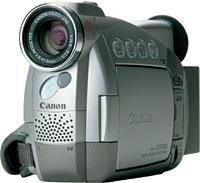 The Canon ZR50MC is a full-featured Mini DV camcorder designed for a range of users from casual shooter to serious hobbyist. Compact, lightweight and easy-to-operate controls make this a great camcorder for video recording in almost all types of shooting conditions. The ZR50MC comes complete with an accessory shoe, still image capabilities and USB port connectivity. The inclusion of virtually all the features you would look for in a consumer camcorder, as well as some very interesting extras such as two batteries and extended tape modes, give the ZR50MC added value. Once you become familiar with the layout of the controls, you’ll find the camera easy to operate and the quality of the video and audio recording will impress you.

The Canon ZR50MC camcorder uses the Mini DV format and also came equipped with a multimedia card for still-image acquisition. The logically laid-out controls were easy to reach. It had a 22x f/1.6 optical zoom lens and 440x digital zoom. Rounding out its features were USB for still images and even user-selectable luminous colored buttons.


The ZR50MC also acted as an analog-to-digital converter. By connecting the analog out from a VHS VCR or Hi8 camcorder into the ZR50MC, we could capture video directly to a computer via an 1EEE 1394 cable. You don’t get device control this way, but it is a very convenient way to get analog video onto your computer.


So, what is the downside? First, tapes recorded in these extended modes (ESP and ELP) will not be compatible with most other Mini DV devices. Second, neither mode is DV-compatible, meaning that you will not be able to capture or transfer DV data over an IEEE 1394 connection. In our tests, even the 3-hour ELP mode recorded video that was indistinguishable in quality from DV when we played it out the analog S-video connection to a television. Still, it was not DV, so we would not recommend these modes for editing. And in a critical video situation, we’d stick to the SP or LP DV modes. Still, for casual recording or in a tape-shortage emergency, selecting one of the extended modes might be a lifesaver. The camera also ate a reused Panasonic DVM60 test tape about 90 minutes into an ELP-mode recording, although we were unable to reproduce this problem and cannot conjecture on whether the problem was with the camera, the mode or the tape.

Proof is in the Picture

The zoom control on the ZR50MC worked very well through the generous 22x optical range. We surmise that the excellent image quality we got from this camera was largely a result of the lens and not from the modest 1/6-inch CCD.


For video purposes, the CCD was adequate, but the low pixel count did directly impact the resolution of the still images, limiting them to a relatively small 640×480. At this size, it was almost pointless to use the still image feature, since a DV frame grab would yield a larger 720×480 still. This was borne out in our tests, which showed that DV frame grabs were of similar quality to the still images captured to the SD Memory Card. Getting still image data on and off of the memory card via the USB connection, however, is easier than grabbing a frame of video from an IEEE 1394 port.


The focus features of the camcorder were sufficient for most situations. The manual focus control was located on the left side of the camera. When shooting single-handed, we operated it with our right thumb. Using two hands improved the steadiness of the shot and made focusing easier. When utilizing a tripod, the placement of the manual focus control also made more sense and was easier to operate.


The audio system of the ZR50MC provided quality results. The internal microphone worked well for recording ambient sound and for small-room situations. Working with an external microphone plugged into the microphone jack provided even better results. The resulting audio was crisp and clear, effectively recording sound good enough for many professional applications from a variety of microphones, including omnidirectional and shotgun styles.


One impressive feature of the ZR50MC was the quality of the video and audio recorded onto tape. Excellent color rendition combined with sharp results in various lighting conditions made this camera a cut above most in its price range.

All in all, the Canon ZR50MC is a nicely engineered, easy to use, high-quality camcorder for home video, as well as a useful tool for those who want to edit.


Once we were comfortable with the layout of the controls, we found this Mini DV unit to be much more than just a camcorder. It is better described as a high-quality digital video recording and playback unit for use in the field, in the studio or in the edit suite.


The thoughtful inclusion of two Li-ion batteries, one large and one small, improved the versatility and portability of the camera. When you also consider the various recording modes, you could theoretically shoot three hours of video (but not DV) on just one tape using only the batteries that come standard with the camcorder.


The ZR50MC shows that quality audio and video can make up for some of the inherent difficulties of working with smaller electronic gear.