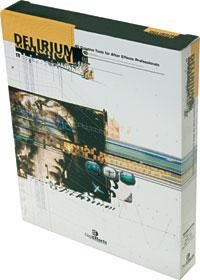 DigiEffects is most famous in consumer circles for its reasonably priced AgedFilm plug-in. Among DigiEffects other items is a set of plug-ins for Adobe After Effects (AE) called Delirium. The plug-in set covers a broad range of effects from camera-angle simulations to psychedelic lighting effects, but the highlight of the package almost certainly is the particle effects. Even if you are an AE novice, this set of plug-ins can really add that extra sugar to your eye candy.

Particle effects are visual effects based on many small individual particles instead of an effect that alters an entire image at once. A hue effect, for example, would alter an entire image, while a rain plug-in is a particle effect, with each drop acting as a single particle. Particle effects can be very computer-intensive, as the plug-in needs to calculate the position and trajectory of hundreds or thousands of particles for each frame. The measure of a good plug-in is based on two often-conflicting characteristics: features and ease of use.

For our review, we used AE 5.0 on a 1GHz Windows machine. We used the SnowStorm plug-in as an example (out of 46 choices – see the Tech Specs’ "Included FX" for a complete list) because it was one of our favorites.

Once in the composition area of After Effects, a long dialog box with dozens of options appeared. Some of these were obvious, such as size, density and speed, but the wind controls were the key to selling the illusion. The wind had variable gusts to give the flakes a random, airy, floating quality. The variables were fully keyframeable on AE’s timeline.

By far, the most clever part of the effect was the snow, which piled up as it accumulated over time. It gradually built up on the bottom of the screen, but when we had an alpha channel (for transparency) on the layer, the snow built up on that. This effect could be used to make snow pile up on a corporate logo or title, but there are certainly more creative applications. A number of other Delirium plug-ins also take advantage of the alpha channel as the origin or target of an effect.

Many parameter ranges (which we looked up in the manual) were confusingly easy to exceed, so while a Size slider might go from 1 – 100, we could simply click on the number and manually enter 339 if we wanted to, with unpredictable results. Depending on the effect, the controls were sometimes sluggish and the preview window could take many tens of seconds to update. This is not anything that is particular to Delirium, but more a matter of using AE on a not-so-fast-anymore 1GHz machine. Rendering was not unusually slow, but depended on the effect, its complexity and the number of layers on which the effect was applied (multiple layers add realism). None of the effects we played with had any presets that came included from DigiEffects (you can add your own), which is something we would have liked to have seen.

Realistic though the effects are, you will fool few people in this FX-savvy age. You might be able to add a subtle bit of fog here or there, but you can forget about using the smoke and fire plug-ins to convincingly incinerate your Toyota. If you don’t feel the need to be constrained by reality, Delirium gives you an expansive set of high-quality tools. The $695 price tag is not cheap, but these effects are a good value for a professional’s toolbox. Depending on your rates, you might be able to get Delirium to pay for itself with just one 10-second corporate logo or it may be just what you need to make a client gasp and clinch a contract.