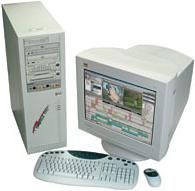 The 1 Beyond 770 turnkey looks like any other PC in its unassuming beige full-tower case. Under the hood however, lurks a real beast–a real-time beast. Combining real-time hardware effects and transitions, courtesy of a Canopus DVStormSE card, with the raw number-crunching of dual-AMD Athlon MP 1800+ processors, machines like this make the nightmare of eight-hour renders seem like a distant legend from last century. If you can afford this turnkey, you may never have to wait for a render again.

Everything seems to come in pairs on this system. The dual-head Matrox G450 display card drives dual 19-inch ViewSonic monitors that made Adobe Premiere seem downright spacious, especially when we connected a third television monitor for previews via the S-video out port on the back of the DVStorm card. Premiere was not entirely well behaved across two monitors. For example, the capture dialog would not function properly when it was on the second monitor, but it was not difficult to accommodate these few quirks.

The system came stock with 220GB of video storage space, which came in the form of one 100GB and one 120GB hard disk. Although they were connected to the IDE RAID on the motherboard, they were not configured as a RAID. Of course, the really exciting dual was the pair of AMD Athlon MP 1800+ processors, which could dramatically improve system performance in all situations, whether the software is designed to multithread or not. But let’s get to the real question: do dual CPUs improve performance for video? And, more specifically, what is the impact of two CPUs in Premiere and for MPEG-2 rendering on this particular computer?

We ran a number of tests (in Premiere) checking timeline render times with both CPUs and then popped one of the CPUs off of the board and ran the tests again. Generally, for transitions, titles and simple overlays such as picture-in-picture, we saw an average increase in performance of only about 20 percent, with a surprising exception being Canopus hardware transitions that rendered almost 40 percent faster in some situations. MPEG-2 rendering was more in line with what you might expect, with renders occurring almost in real time. A 10-minute DV clip took about 11 minutes to render, which was about 91 percent faster than the system with only a single CPU.

The major marketing push for all real-time cards are the real-time effects and transitions. While all cards, and even most software editing applications, will preview in real time, sending finished video out the S-video connection, not all actually offer real-time rendering to DV.

When configured correctly, the DVStorm allowed us to edit an entire project without any rendering at all, which is the true definition of real time. Of course, we were limited to using Canopus transitions and effects, but the range of included real-time effects is broad enough to cover 95 percent of your editing needs, including titles, alpha transparency and even some fancier effects, like embossing. We could stack up three or four layers and use a couple of video filters before Premiere’s red render bar appeared. As long as we stuck with Canopus effects, we could, at any time, immediately do an Export to Tape and go straight from the timeline to our DV camcorder.

We did experience some peculiarities with one of the default project settings that was supposed to be real time, but insisted on rendering everything. We could never figure out why that was the case. When rendering was required (for a Web-destined project for example), Canopus transitions were, on average, 150 percent faster than similar software transitions, and approached real-time territory with dual CPUs.

The system’s recordable DVD drive is the standard Pioneer DVR-A03 that we’ve seen on most of the turnkeys we’ve had in our lab. We still haven’t been able to flesh out why some DVDs burned with the Pioneer drive on some turnkeys are widely compatible and some are not. The DVDs we burned with this particular machine, using Pinnacle Impression SE, were compatible with only about 60 percent of the players we tried. This is not particularly bad, nor particularly good, but is typical of what we’ve seen. And, of course, the newer the DVD player, the more likely it was to play back our DVD-R discs.

This was more than just a fast machine with good stats. As one example, a pair of Thermaltake Volcano 6 Cu (copper core) CPU heat sinks and fans cool the CPUs. 1 Beyond probably could have made a few more dollars profit using the stock fans that came with the CPUs from AMD, but we appreciate and acknowledge this attention to detail. We did have one small problem with the machine: although it was supposed to come with 220GB of video storage space, we found only about 100GB on the machine. When we took the removable drives out, they were clearly labeled 100GB and 120GB. We called tech support and, after three rings, were talking to George (no recordings, no menus), who suggested that it was unusual, but that it sounded like the 120GB drive wasn’t formatted. He walked us through identifying the problem and ultimately formatting the drive, click by click.

We have always liked the Canopus DVStormSE card and really enjoy working with its real real-time-to-DV features. And when a dual-headed monster like the 1 Beyond 770 surrounds it, our cynicism about the meaning of real time melts away into editing bliss.