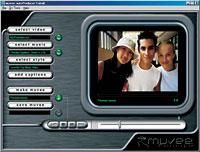 We’re not broadcast professionals here at Videomaker, although many of us have worked in the industry. We do take our video editing very seriously. muvee autoProducer Cobalt 2.0 is not for "serious" editing. It doesn’t compete with Avid, Premiere or iMovie. It is in a different class of product all together. muvee autoProducer is a fully automatic video editing wonder that is a great value to anyone needing to instantly make music videos and montages.

autoProducer quickly analyzes your video, performing optical scene detection, eliminating poor-quality material (too dark or shaky), tracking important objects and even finding faces. This analysis is then used to make automatic edit decisions, including selecting the best and most interesting footage, trimming and adding transitions and special effects. The final product is a music video, set and synchronized to your music (all the natural sound is discarded). It requires very little user interaction beyond selecting music and an editing style.

autoProducer presented us with an uncomplicated interface that offered only six buttons. We first captured about 20 minutes of source footage from a recent party via an OHCI-compliant IEEE 1394 card. Next, we chose an MP3 file for music. The Select Style button offered a couple dozen genres or types of productions, from the romantic "Valentine" to the psychedelic "Acid.


It included options to edit clips in or out of sequence or to create a slideshow based on stills from the video. We selected a style, added text for templatized opening- and closing-graphics and clicked the Make muvee button. After muvee analyzed the video (taking roughly 10 minutes) and the music (less than a minute), our muvee was ready to preview. After the initial analysis of our footage had been completed, we could go back and select different styles and instantly preview the muvee without further analysis. Our favorite style was Cinema, which made a 16×9 crop of the video, added a progressive frame flicker, adjusted the color and added a noticeable grain. If you don’t like the edit, just click the Make muvee button again and muvee will re-edit another version of the piece in about two seconds. Once you have a muvee you like, you can render the project to a format that you can output back to your camcorder or upload to your Web site. autoProducer also handles the print to tape functions for DV video.

Since autoProducer doesn’t actually have any sense of human aesthetics, we wondered if we’d end up with long slow-motion shots of strange footage that a human editor might edit out. The footage choices were random, but the program eliminated most of the bad stuff. Pacing and effects were all nicely coordinated and synchronized.

During a shoot, what is your response to the inevitable "When can I see the video?" We bet you could bring a wedding party back to sentimental tears by the end of the reception if you had autoProducer and a laptop.


Download the free trial version (6MB) and see what it does with your video. The trial version is fully functional, though limited, and adds a watermark that appears in the final video. Once you’ve tried it, we bet you’ll want the full version, too.