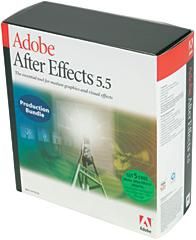 The timeframe between major revisions of After Effects was a bit disconcerting. Many of us just finished loading Version 5.0 onto our machines and were ready to settle in for a long, productive relationship. It was almost as if both packages, 5.0 and 5.5, had come off the assembly line right behind each other. If this had been a 5.0.1 fix for bugs, it would have been in keeping with the software manufacturers’ modus operandi, but 5.5, within less than half a year? Although the upgrade price from 5.0 to 5.5 is only $99, the question still remains: Is it worth it?

OK, in reality, we were excited to have a new After Effects. Past versions of this application had won our hearts. AE 5.0 was like a supermodel; the more you saw it the more you liked it. But some very enticing additions accompany AE 5.5 and, as an incentive, if you register your product, you will receive three more plug-ins.

Right after it released Version 5.0, Adobe, via its Web site, offered a beta version of this rendering plug-in, which solved some of the intersect anomalies with layer planes. For example, if two layers intersected perpendicular to each other, in some views, when rotating a camera around the two objects, the layers would not appear to actually intersect. The illusion of being in three dimensions was lost (even though these were actually two-dimensional planes being worked with), but Advanced 3D Render solves this problem. The beta version comes with an expiration date, so you must get the upgrade to continue using it.

The most exciting goodie in the Production Bundle ($1,499) was Zaxwerks 3D Invigorator. (The standard version of After Effects is $649.) This sweet application extrudes 3D shapes from Adobe Illustrator vector graphics files and fonts, creating instant 3D objects without the torment of having to model them with tedious wireframes. Just import the graphic, apply the 3D Invigorator and you’re in business.


You’ve seen this plug-in at work before on the nightly news and sports shows, with glistening, extruded 3D graphics and lighting effects on network logos and the like. When you were thinking, "man those folks at the networks are good," you were actually talking about the people at companies like Zaxwerks. You are going to love this AE addition. The interface was easy to understand and the results were magnificent. Extrusion depth, selectable surface texture and color and lighting were all point-and-click adjustable and keyframeable for animation with surprisingly fast render times. Zaxwerks will happily upgrade you to its pro version for a couple of hundred dollars, but the standard version was awesome by itself.


The Zaxwerks plug-in is touted by Adobe as a $495 value that you get "at no added charge." Be careful though you can’t get 3D Invigorator by upgrading the 5.0 Production Bundle to the 5.5 Production Bundle for $99. What do you get for the $850 difference between the $649 standard version and the $1,499 Production Bundle? The Adobe Web site has an extensive list of extras that range from necessary tools that many professionals will not be able to do without (such as advanced keying, motion tracking and vector painting, to name but three) to more frivolous effects extras.

In the "what’s new?" column, AE 5.5 itself incorporates native support for Mac OS X, colored shadows, projection layers to simulate slide-projections and stained glass, and four-color gradients (like Illustrator), which is a nice creative addition. You can now look at a composition from several views at once, which helped us get our bearings a lot better in the 3D realm. You can now add motion blur to individual masks, and the addition of Smart Mask Interpolation helps in mask animation. AE 5.5 allows lights to be applied to selected layers by designating a light as an adjustment layer instead of a light affecting all 3D layers in a composition.


The specular material options that were present in 5.0 for 3D layers now work in 5.5, adding highlights to enhance the look of metallic surfaces. In 5.0, they seemed to have no effect. Many users thought they were just not using them correctly, because nothing would happen, so this fix is welcome.


After Effects 5.5 will take time for the general user to digest. Due to space limitations, we can only hint at the depth of the 5.5 upgrade. The intricacies of work flow and management improvements are not as flashy as some features, but overall, AE 5.5 is a sophisticated heavyweight.