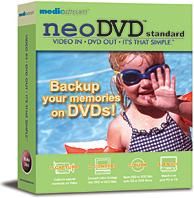 Affordable DVD authoring apps have been oozing out of the woodwork during the last year. And, as rapidly as the technology has emerged, second generation (and later) products are also appearing. Products such as neoDVD, now up to Version 3, should be mature and stable.


Its feature set puts it with other DVD authoring applications aimed at the beginner. neoDVD allowed us to capture our video, trim it, author the DVD, encode the MPEG-2 video and burn the disc. It also allowed us to copy existing DVD discs, which is something we haven’t seen in other DVD authoring applications. (Don’t get too excited: almost all DVD movies that you rent or buy are far larger than the 4.7GB capacity of blank discs.) The nice introductory wizard, basic PDF manual, online Help and Flash tutorials really helped to ensure success for a first-time burner. Although the application uses a non-standard interface, the simplicity of its design makes it difficult to criticize the program for that reason alone.

The simple capture application allowed us to capture video to the hard disk, as expected. Even easier, we could automate the whole procedure and allow neoDVD to capture, encode and burn a DVD, all with one mouse click. The application also allowed us to capture, encode and burn a live video feed straight to DVD. neoDVD follows and supports the OHCI standard for IEEE 1394 cards and will work with any compliant board. It did not work with (and did not claim to work with) non-OHCI Pinnacle capture cards (a DV500 PLUS caused it to crash) or even with DV AVI files that used proprietary Pinnacle DV codecs. neoDVD did detect other analog capture codecs on other machines and was able to successfully capture and process analog video.

Adding DV AVI files to a simple file list creates a chapter order for the disc. The basic In and Out trimming tools worked as expected. Chapters were created based on individual video files. A single video file could be broken up into multiple chapters by repeatedly adding the same larger file to the project and then trimming it to the various chapter points. The Menu tab presented us with an unchangeable template that had menu thumbnails derived from the first frame of video in the clip. Each thumbnail had a title (initially based on the file name of the video clip) that we could change. We could also adjust the font and color as well as the background image.


That describes the entire extent of the authoring options. By limiting your options, however, the odds that you will quickly and successfully create a DVD greatly increase.

MPEG-2 encoding happened at about twice real time on our 933MHz test machine, meaning that a 10-minute DV AVI file was encoded to MPEG in just under 20 minutes. MedioStream’s Web site suggested that encoding would take place in real time on any computer that could match the performance of a PIII 1.1GHz processor. There were no options available to control the MPEG compression, something more advanced users may want, but not something a beginner would likely care to fool around with. The quality of the resulting video was good, but not spectacular, and we feel that MedioStream has done a good job of balancing the speed and performance of the encoder against the quality of the final file.

Once the authoring process was complete, we burned a disc with a Pioneer DVR-A03. There was no way to preview the behavior of the disc before burning, so we went ahead and clicked the Make Disc button. The burn itself was uneventful and stress free. Tests in a number of different stand-alone DVD players were all successful. We could burn to DVD-R and CD-R discs. (Of course, the CD-R discs were not compatible with most DVD players.). The final movie displayed a MedioStream splash screen at start-up before displaying the root title menu. When we clicked a menu item, its title displayed over the beginning of the clip for five seconds before fading. We’re divided on whether we like that or not.


We did encounter a few cases where neoDVD would hang while closing a CD-R. We waited for 15 minutes after the "burn" light on the CD drive (TEAC CD-W516EB) had turned off to eject the CD. We found that the resulting CD was fine in all of the CD-ROM drives we tried it in, so this appeared to be a failure in the software that luckily happened after the burn had finished. Interestingly, the 2.0 version of neoDVD did not have this problem in our tests (we reinstalled it to double check) and the application did not experience similar problems with the Pioneer DVR-A03.

neoDVD is somewhere between a simple DVD burner and a full-blown authoring application. Certainly, it has many features that make it much more advanced than a disc burning utility (such as Nero), but, on the other hand, it just doesn’t have the menu authoring capabilities of other slightly more expensive DVD-authoring packages. We haven’t seen DVD disc copying in any other applications, so if that were was important to you, neoDVD would be a great purchase. MedioStream gets high marks for letting you make your own decision risk-free. Visit MedioStream’s Web site and you can download a trial version (approximately 22MB file) that will encode five files.