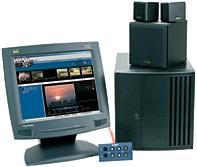 The first thing you’ll notice when you uncrate this DVGear Pro-ONE turnkey system is the contrast between the monolithic cubic black case and the lithe 17-inch LCD flat panel. This is a very distinctive machine. We were excited about getting our hands on the latest Pinnacle Pro-ONE real-time card on a fully configured Windows XP system. If you want to use Premiere as your primary editing tool and are in search of real-time previews, this is one system you should seriously consider.

The 17-inch ViewSonic LCD monitor was the first panel we’ve seen that made us believe the hype that LCDs may eventually replace our bulky CRT monitors. LCDs can have significant redraw issues, which is important if you need to refresh the screen very quickly, like when playing games or, say, watching video. We used the Pro-ONE breakout box to connect the S-video output to an NTSC television monitor for previews. In this arrangement, we enjoyed using the easy-on-the-eyes LCD monitor as our editing workspace next to the reference monitor for previews.


Another thoughtful extra was the EZ-302-P Premiere keyboard with color-coded shortcut keys. We are big fans of learning and using shortcut keys and this keyboard made that process much easier than trying to reference and memorize a shortcut key list.

The Pinnacle Pro-ONE came with a standard breakout box on the end of a very stiff cord. The breakout box has input/output ports for analog S-video and composite video, but no FireWire port (typical for this style breakout). Analog capture worked well, transcoding composite and S-video sources to DV. Pinnacle’s DVTools capture utility was excellent, with useful tape scanning and scene detection features that made up for the competent-but-now-feature-poor Premiere 6.0 capture application. The system worked well with the newer camcorders that we tried. We did discover one DV camcorder that the Pro-ONE did not like: an ancient (six-year old) Sony PC7.

At the heart of this system is the Pinnacle Pro-ONE card, which is described as a real-time card. Given a broad enough definition of "real time," this was an accurate claim. We previewed a whole host of effects in real time (RT), which was an unquestionable benefit. Many software editing environments (but not Premiere) already do real-time previewing without special hardware, with the quality of these previews being dependent only on the speed of your computer, often dropping frames and sacrificing quality in the name of real time. That said, the real-time previewing of full-frame size and rate video on the Pro-ONE was uncompromising. One example: When we modified a fancy Hollywood FX RT transition (with more keyframeable options than any mortal could ever need), the effect previewed on our external television monitor at full quality.


When we returned to the timeline, however, we still needed to render before we could output to DV. This isn’t a criticism of the technology, but the marketing mantra of "real time" needs to be understood before you buy, whether you consider the Pro-ONE or some other real-time card.


We tried it out on a time-lapse clip shot in a typhoon. It had plenty of shakes that on-camera stabilization could not compensate for. The Pinnacle image stabilization cropped the frame in a little and the video was a bit softer than the original, but the algorithm worked well and was quite fast. In the final analysis, we couldn’t decide if the steadier video was worth the price of the minor loss in quality in this particularly challenging test, but it worked as advertised.


The amount of time needed to render an effect to DV varied depending on the complexity, but a complex two-second Hollywood FX RT transition could take 12 seconds to render. The Pinnacle Picture-in-Picture feature was fast and responsive and only added marginally to the overall render time. Interestingly, a Pinnacle "RT" cross-dissolve took 154 percent longer to render to DV than the stock cross dissolve from Adobe.


We did have some odd screen redraw problems as Premiere occasionally became sluggish and refused to output any video to the preview window. If another video application (e.g. Pinnacle Impression) was open at the same time, Premiere would not display any video at all.


Impression SE DVD authoring software comes bundled with the system, although our review unit was not configured with a DVD-burning drive. Impression is a capable app that requires that all media be prepared (it does not encode MPEG-2 video) before being inserted into a project, so you have to use Premiere to render your project to the proper format. Rendering a 30-minute project using Pinnacle’s own MP2 (MPEG-2) codec took 68 minutes. The resulting video file looked very good on our computer monitor, even on sharply contrasting boundaries and delicate titles.

This was one of the niftiest turnkey systems we’ve seen. From its jet-black cube with lots of room inside for terabytes of hard disks, to the sexy matching black LCD panel, to the latest real-time video hardware, we were excited about testing this machine the moment we saw it. While you can get budget Pro-ONE machines at a lower price, the attention to detail and the backing of an experienced vendor make this a value for the editor who needs a solid Premiere-based RT previewing environment. Just don’t get your hopes up about never having to render ever again.