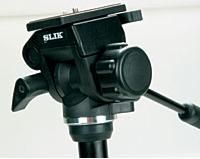 [Now Distributed in the U.S. by:

The affordable SLIK 504QF II tripod, designed for beginning to intermediate videographers, is loaded with high-end features. Built to support small camcorders, the 504QF II combines stability with smoother panning and tilting movements than most tripods in the $200 and under price range. Along with this fluid-movement head comes an ingenious design that allows for a far wider range of shooting heights than you would guess upon first appearance. Although limited in some ways by features intended to keep its cost down, the 504QF II is a good tripod for home users and intermediate videographers looking for a portable solution.

Weighing slightly more than five pounds and measuring 27-inches-long when collapsed, the 504QF II tripod is constructed of lightweight but strong metal. While the literature says it is designed to handle cameras weighing up to 11 pounds, we think it is more suited to cameras weighing less than five pounds. The leg locks, durable plastic twist knobs, were easy to find and tightened up quickly.


The adjustable legs can angle and lock in three different positions. The tripod allows for an operational height range from 19 inches to just over five feet. This range can extend even lower with an optional shorter central column accessory. The tripod’s feet are simple rubber stops, which worked well on asphalt, rock and tile. Both an encircling plastic locking collar and a simple column stopper screw manipulate this tripod’s central column, which was easily removable and inverted for tabletop macro shots.


According to SLIK’s printed materials, the 504QF has a "specially designed positive-action fluid head for smooth panning." While we couldn’t verify that the 504QF has a true fluid head, it did perform smoothly in our tests. Flat-mounted to the column and designed with separate movement locks, a quick-release platform and a bubble level rounded out the top of the tripod.

Average in size for a tripod in its price range, the 504QF was well balanced, easy to hold and its large control knobs were easy to adjust. The twist controls on the legs turned smoothly and locked well. Not once during field-testing of this tripod did we notice any slipping of the legs in any of the different positions that we used. Even though the legs locked firmly and relatively quickly with its twist locks, the setup time was still a great deal slower than it would have been with a tripod that used quick-snap locks. But, for most hobbyists, the few extra seconds of setup time will not be a problem.


The legs were sturdy and provided a stable platform for shooting, even on uneven, hilly terrain. Unfortunately, the tripod’s feet weren’t as versatile as the legs. The rubber feet worked fine on concrete, gravel and even slightly wet wood, but the rubber feet popped off easily when tugged and sank into soft ground. Larger feet would have given more stability to the tripod in this terrain.

The 504QF II’s pan-head smoothly adjusted both vertically and horizontally. The quick-release is aligned with the back of the tripod (instead of the side), which might be a disadvantage for longer video cameras.


The motion when panning and tilting was smooth, and adjusted quickly yet gracefully to changes in touch. Even footage shot while simultaneously zooming, panning and tilting appeared smooth on playback. The design is not perfect, however, as the head had a spring-like return to center when tilting, causing us to question whether this is a true fluid head. This feature was not something we liked particularly, since the head would not remain pointed up or down at high angles without locking the head.


By inverting the center column, we mounted the camera underneath the tripod’s legs to shoot flat-art, pictures and extreme closeups. Although fun, it took time to shoot objects in this slightly upside-down orientation.

Standing on Its Own Three Feet

The 504QF II is a sturdy, affordable tripod that offers extremely good movement and the unit was easy to use. Even though there were a few minor drawbacks with the unit, such as a lack of spikes for rougher terrain and no spreader to add stability, this tripod’s solid construction, smooth-moving head and quick-release mount make it a good bargain. While this is not a professional-level tripod, it is a significant step above the $50 tripods that are sold in most department stores.