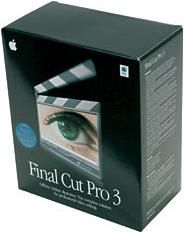 There comes a time in most creators’ careers when they outgrow the basics and look for a more professional set of tools. Apple’s new Final Cut Pro 3 (FCP3) software fills that bill for video editors with real-time previews and even real-time rendering in some cases. FCP3 is an advanced application designed as an all-in-one video and audio post production solution with built-in special effects, titling and bundled third-party audio tools. The program runs best on the Mac G4 Velocity Engine running the new OS X. And the user interface is easy enough to master that almost anyone familiar with video editing can operate it right out of the box. Final Cut Pro 3’s features give you lots of room to grow and should take you anywhere you might want to go in the future.

The FCP3 interface is largely similar to the first version, which is a very good thing. With multiple windows, a drag-and-drop timeline and lots of keyboard shortcuts, it’s familiar ground to FCP fans. A new engine lurks under the hood, however, and with the right CPU you’ll get real-time effects that don’t require special hardware. And wipes, dissolves and color correction happen in real time when you use DV footage or in OfflineRT mode, provided you have a G4 (running OS X recommended) with a 500MHz or faster CPU. We’re talking about network caliber dual-stream, real time effects such as cross-dissolves, titles and color correction. Before now, these capabilities would have cost you over a grand.

FCP3 is flexible. You can use it as a basic cuts-only editor or a complex NLE application with three-point editing, compositing and more. Perhaps best of all, you can work seamlessly with all video formats from DV to HDTV all on the same timeline. We used it to cut together a music demo tape with footage from DV and analog Hi8 sources. We color-corrected the various sources so they’d match and enhanced the color of the entire project. Then, we added some snazzy transitions and titles and output our project back to the camcorder and rendered it again for the Web. We took advantage of Version 3’s QuickView feature. QuickView let us instantly preview sophisticated effects before rendering them. Real-time previewing is now a common part of many editors and we can’t remember how we survived without it in the past.

OfflineRT is a smart new feature. It allowed us to digitize about 45 minutes of video onto 1GB of hard drive space using a proprietary Apple codec (probably based on MPEG-2 or MPEG-4 encoding). The quality of this full-frame size, full-frame rate proxy video was quite good. We tested it on a laptop and captured footage directly to the hard drive while seated on a boat and were impressed with the amount of space we saved – the file sizes took up 20 percent of the space necessary for DV footage. When editing was finished, it was a simple matter to use our project file, DV camcorder and source tape to batch-capture the original DV footage necessary to render a DV movie.

The built-in software-based waveform and vectorscope monitors were accurate with SMPTE color bars that were input via an external hardware scope. This new feature allowed real-time monitoring of video levels. Scenes that were too bright (overexposed) could overlap with a zebra-stripe pattern to indicate problem areas. Another area where the new version shined was color correction. Like the transitions, it was all done in real time, which for a software-only engine is a powerful feat. We could tweak the color balance and saturation of our footage to fix any problems, or we were free to try something unconventional for a music video, for example.

FCP3’s admission price for all these real-time features is fairly stiff. For real-time effects using DV footage, you’ll need a G4 with the new Mac OS X, 384MB or more of RAM and a single or dual 500MHz (or faster) processor CPU. There’s no doubt that at $999, one needs to consider this as a serious investment. But as an all-in-one solution, you’ll only have to write one check and you’ll gain the use of several applications.

Not only did we run basic tests and edit a few projects with FCP3, we also spoke with several aspiring and working video professionals. The story is clear — the Mac is still and again a powerful video tool for professional and hobbyist alike. And it is extremely significant for a software program to provide users with real-time performance.

As CPUs get faster and faster, look for more software applications to take over some traditional hardware functions.

And let’s not forget the documentation. The manual and the tutorial book scatter ink across 1,400 pages, making this perhaps the most extensive documentation ever produced for a desktop video application. Apple also supplied us with an invaluably handy keyboard hotkey label.

For just under $1,000, Final Cut Pro 3 is a state-of-the-art editing, effects and compositing solution. With real-time previews and some software-based real-time effects and transitions, it is professional editing software at its finest.