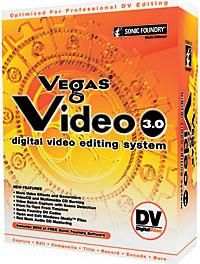 Sonic Foundry’s Vegas Video made a splash at the Ball nearly two years ago, surprising the established industry players with its maturity and poise. Sporting a simple, clean and uncluttered workspace and powerful audio features, Vegas 2.0 was an impressive product despite a few minor weaknesses. Our expectations were high for this 3.0 release.

Break with the Past

Many editing applications rely on an analog A/B-roll metaphor for editing, simulating the A and B VTRs used in analog linear editing environments. Perhaps this is a comfort for editing veterans, but it doesn’t really make sense on a computer. Vegas’ simple hierarchical track organization is easy to understand for the novice, and A and B rolls are available for old-school editors. We especially appreciated the ability to drag clips and overlap them in order to create instant crossfades for both audio and video clips.

Vegas is still easy to learn. There are also many thoughtful shortcuts for power users that will take some time to master (such as Avid-inspired J-K-L keys and mouse-wheel scroll, jog/shuttle and zoom). Vegas loads faster, has a tiny 40MB footprint, and seems to be more stable than its main competitors. We experienced no crashes during our extensive testing.

Two new features immediately jumped out at us in the largely unchanged workspace, however. First, the Media Pool window (a.k.a. library or bin) at the bottom of the application is now graphical, displaying thumbnails of visual media, both still and video, for easy browsing. Second, track keyframes now appear on the timeline (as they do in Premiere). This was more than a cosmetic change, as we noticed that the keyframes were smart. If we repositioned a clip on the timeline, the keyframes moved with the clip. Ripple editing, grouping and multiple selections all worked well, with individual clip keyframes sticking like glue to their associated clips. It wasn’t perfect, but it saved an unimaginable amount of time.

Vegas 2.0’s biggest weakness was its capture utility. It wasn’t that it was bad, but it lacked more advanced features found in many other applications, most notably, batch capture. Vegas 3.0 answers our criticism with an excellent implementation of batch capture that worked flawlessly. We are happy to announce that Vegas handled time code breaks without a hiccup and transparently captured across audio sample rate changes that have bombed lesser applications.

Vegas 3.0 offers scene detection as a default part of the capture process, although it was not perfect. The detection occurred simultaneously with the capture process, but there was no feedback on the screen as this was happening, so we needed to wait until the process was complete to see how the scenes were broken up. Vegas uses date/time-stamp information as the basis for splitting scenes (among other DV data info such as time code breaks) and it worked well on raw footage shot with a camcorder. When we captured material that had been edited back to tape however, Vegas was unable to correctly split scenes that did not have date/time stamp information (such as recompressed scenes or animations saved to DV .avi files).

We don’t usually mention effects in these reviews; every app has about a half-million that you would never use and Vegas is no different. Still, it would be unfair not to mention that Vegas’ implementation of effects (both transitions and filters) is very good. We especially liked the aged-film plug-in (Film FX), which had nice manual controls and some very cool presets (from ancient sepia "Circa 1908" to a 1980s-style grainy color film preset). The track alpha channel properties were also very impressive. Among a dozen or so advanced alpha modes was one called "Difference," which allowed us to create a matte by analyzing the differences between two scenes.

Sonic Foundry also takes the underlying technology very seriously, although it is very hard to objectively assess some of these features. For example, the company developed its own DV codec, though we had never noticed that there was a problem with the Windows DV codec. Sonic Foundry has also dropped the Ligos MPEG-2 encoder in favor of one from the German company MainConcept. Whether this was done for economic reasons or because the MainConcept encoder is genuinely better is pure speculation. For the purpose of this broad review, suffice it to say that we liked having access to the more advanced controls and that the quality was as good as any. Dynamic RAM previewing is another potentially useful feature, although we like the immediacy of Vegas’ normal previewing, so much we didn’t test this feature more fully.

We liked Vegas 2.0 when it first came out, mostly because of the clear and logical workspace and the attention to efficient detail. It was a radical break from the rest of the computer video editing pack then and has fortunately remained largely unchanged. The improvements in the capture utility eliminate Vegas’ biggest handicap and the many 3.0 updates add an impressive luster to an already bright diamond. If you regularly need to collaborate with other editors on projects, you may want to learn and use a venerable and more widely used editing environment, but for the rest of us, there’s Vegas Video.