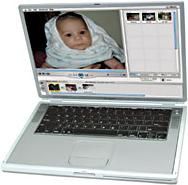 Truly portable editing environments with sufficient muscle to do real work were few and far between just one year ago. Now, with inexpensive laptop computer power increasing, there are an increasing number of choices for those who need a mobile machine, either for rough edits in the field while shooting or for finished productions under tight time deadlines. Case in point Apple’s Titanium PowerBook G4, which comes ready for editing, complete with a FireWire (IEEE 1394) port, a zippy 20GB hard drive, and Apple’s own iMovie 2 software.


Though it was designed more as an all-around mobile computing solution than as a laptop editing device, the Titanium PowerBook G4 has plenty of editing muscle to work with. The price may seem a little steep at first, but it’s actually quite reasonable when you consider all of the options that come with the package.

As with most Apple products, the Titanium PowerBook G4 incorporates many design elements that make the product more attractive and also make life easier for the end user. The first thing we noticed about it was the slimness and simplicity of the overall design. (The computer is only an inch thick; pretty impressive engineering.) At first glance, it seemed unlikely that such a sleek, unadorned thing could have so much potential. Closer looks revealed a small slot for CDs on the front and a flip-down panel that exposed multiple connections on the back, including FireWire, two USB ports, modem, Ethernet and power connections. The computer’s case is constructed of super-strong, super-light, aircraft-grade titanium, which helps keep the overall weight of the unit to a minimum.


Even the unit’s power cable is worthy of a mention. In an effort to clean up some cable-clutter that invariable goes with the laptop experience, Apple designers have come up with a handy retractable device for containing the power cord, making storage neater and easier. Though this still leaves a few other cables to deal with, it certainly does simplify things for storage and transportation.


One design element, the pointing device, located below the relatively small keyboard, did not meet with our approval. This device, which is of the common touchpad variety, was difficult to use at best, requiring two hands (or a dexterous thumb) to click and drag clips around the workspace. Anyone planning to edit video on the Titanium PowerBook G4 might want to immediately invest in an external mouse (not included).

When you open up and turn on the Titanium PowerBook G4, get ready for a treat. The large (15.2-inch) display is nothing short of beautiful. Images come through crisp, clean and colorful, and text is easy to read. Video played back clearly with no ghosting that we could see. There was one small problem with the unit we tested a single bad pixel located near the center of the screen. This is within the tolerance for error on these panels, which is usually around 3-5 pixels.


Once the machine booted up, it was a simple matter to begin editing with iMovie 2. The total time duration, from pulling the unit out of the box to transferring the first clips over the FireWire was about 10 minutes. As mentioned in our review of the software in the March 2001 issue and our Best of the Year awards, the iMovie 2 editing software is one of the easiest editing programs we’ve ever seen, so beginning video editors will have little or no problem getting started. More serious editors, however, will long for more substantial editing software, like Adobe Premiere or Final Cut Pro. But be aware you may need to beef up the system’s RAM to handle the more sophisticated software.


One very useful feature we liked is the "S" video out connection. While the connection cable has "S" written on it and superficially resembles a Y/C S-video cable, the included adapter ends in an RCA composite television connection. Still, it is not just a video out connection, but instead turns your television into a second computer monitor (just as a desktop video card might support a multi-monitor setup) that can dramatically expand your workspace. This isn’t really very useful when working with iMovie 2 where workspace is not at a premium, but if you upgraded to a more complex editing environment it would be a huge advantage. Of course the FireWire port allows you to run DV data out to your camcorder and then to your television, which would be a much better way to monitor your project output. All this meant that when we hooked up two televisions to the laptop (one via the G4 video out, one via a DV camcorder) we had an impressive triple monitor setup, with two screens for editing and an NTSC television to monitor previews.


Render times for the Titanium G4 were relatively fast for a laptop unit, requiring about 12 seconds to render a one-second cross dissolve, and about 20 seconds to render a 10-second bouncing title. The unit’s built-in stereo speakers provided adequate sound reproduction, but we found ourselves using headphones for fine-tuning audio edits.


We applaud the efforts of Apple for incorporating video editing as a standard feature on all its laptops, Apple has done much to encourage us that creating high-quality movies is as easy as making music CDs, or writing a letter. Keep up the good work, Apple, and keep the cool toys coming.

Video Out to television