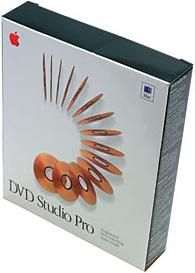 DVD authoring is not a dream anymore. Apple is pushing DVD for everyone, which is certainly exciting. DVD Studio Pro is targeted at a different audience however, specifically the professional multimedia developer, and it squarely hits its mark.


We installed DVD Studio Pro 1.0 on a fresh-out-of-the-box dual 800Mhz Mac G4 with a SuperDrive. The machine had QuickTime 5.0 pre-installed, as well as iMovie 2 and iDVD. The plan was to capture approximately 10 pre-edited shorts, totaling about an hour in duration, from an archived DV tape, then create a DVD with menus and jumps that would allow random access of the material.

DVD Studio does not capture video (nor did we expect it to). We used iMovie 2 to capture the footage since this was what was installed on the machine. DVD Studio clearly stated that it did not encode video and required all media to be prepared before being included in the project. The DVD Studio Pro CD included QuickTime 4.1 Pro (the installed QuickTime 5.0 was not the Pro version and would not encode MPEG) to handle encoding, so we used that to encode our raw DV.


Over the next four hours, we wrestled with memory allocation issues and numerous crashes arising from changes in the audio format in the midst of the source DV files. We were unable, using the tools on-hand, to properly resample and encode the 44.1kHz audio used in one of the short clips on our tape; DVD Studio would not accept anything other than 48kHz audio. Most producers using a nearly $1,000 DVD-authoring app are likely to also have the editing tools (e.g. Apple’s Final Cut Pro) necessary for converting 44.1kHz and 32kHz audio to the required 48kHz.


Once we encoded our video media, it was time to get started with DVD Studio Pro itself. The application’s layout was very clean and crisp not at all cluttered. We added media for the project to the Assets window and added tracks with the click of a button. Within 20 minutes, we felt extremely comfortable working with the application.

DVD Studio Pro’s Property Inspector window assumes nothing. It comprehensively covered every aspect of DVD authoring, from splash screens to automatic disc navigation. This poses a risk to the novice and the careless, because it will not automatically set necessary properties if you don’t specify them. Our first DVD played a track and then sat idle in the machine because we didn’t specify anything for the "Jump when finished" property. What’s worse, we didn’t set a behavior for the remote control’s Menu button, so the DVD was dead in the water. We were definitely guilty of user error, but it illustrated that DVD Studio Pro is a professional-level application that does not limit you in any way, including allowing you to make stupid mistakes. If you are annoyed by applications that insist on making decisions for you, you will love this aspect of the program.


Within each track, it was possible to set markers to use as navigation points that could be jumped to either from menus, automatic events or any other interaction. There is no audio scrubbing however, which means that if you wanted to place a marker in the fade-to-black area between two scenes you couldn’t listen for the audio that might extend into the black giving you input as to exactly where the navigational break should go. The precision of dragging markers also depended on the duration of the track, meaning that small mouse movements on short tracks could set markers to within a frame or two, but on longer tracks it was difficult to get within even a second of the proper position. In addition, video doesn’t scrub particularly easily: you have to release the mouse button (drop the marker) to see the frame it is on. Of course you can always enter numerical values to get frame-accurate precision, but some kind of zooming would be a nice feature here.


We’d recommend that you don’t make the $15-a-disc mistake we did; you should simulate the DVD and preview it before burning. Unfortunately, we had some problems previewing projects and even individual tracks and got an error message: " no DVD-Video decoding hardware" This only happened if we double-clicked the DVD Studio Pro program icon to run the program and then performed a File Open (project) command. Strangely, this problem went away if we double-clicked a project file first, automatically starting DVD Studio Pro in the process. This seemed to prime the system and subsequent File Open commands allowed normal previewing.


After our basic DVD was set up, we created our menus. DVD Studio Pro offers no tools to create menus, and all graphics need to be in a 100 percent finished state before being imported into the project. DVD Studio does, however, support Adobe Photoshop layers, which means that you can create a background and buttons, including layers with rollover and hit images, thereby creating dynamic animated menus.

DVD burning was flawless and took less than an hour. The resulting DVD played in every DVD player we tried (including Panasonic, Toshiba and Sony) except an Apex AD-600A.


We really liked DVD Studio Pro. Almost all of the negatives we encountered were outside of DVD Studio itself. It was easy to use, and had every feature we could think of: AC-3 surround audio encoding, subtitles editor, advanced project tools, multiple video streams for different angles, multiple audio streams for different languages, DVD scripting, error checking and simulation, to name a few. We can’t recommended it for folks looking for step-by-step or template-driven authoring, but for advanced users requiring absolute control, this is the tool to finish the project.