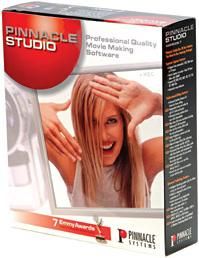 Over the past five years, manufacturers have marketed novice-level video editing software to an unprepared public. Even with the best intentions and the finest minds in the software industry, these applications often fell short of their mark. Beginners were overwhelmed by long render times, hardware conflicts, dropped frames and crashes that computer editing veterans had come to accept with a shrug. Marketing department mantras of "fast and easy" have left many of us jaded and skeptical. With the standardization of DV capture boards, faster and larger hard disks and CPUs that are up to the task of editing video, reality is now authenticating those claims. Pinnacle Studio 7 is a beginner-level application that delivers on the basics, but it also has an ace up its sleeve that may give it an advantage over the competition.

Limited disk space is an issue with many video files. Even with modern disk drives measured in tens of gigabytes, you can never have enough space. Capturing an entire tape to disk is often not an option, especially for casual beginners capturing to their only hard disk. Add to that the infamous Windows file size limitations and you quickly realize that it is pragmatically impossible to simply click a button and capture an hour of DV to a disk (for more on file size limitations see the Size Matters sidebar in this issue’s Computer Editing column). Besides, who would want to hunt through a single, enormous video file looking for that perfect scene?


Pinnacle Studio 7 solves this problem by capturing a small compressed 320×240 preview of your DV tape, making an excellent editing reference in a fraction of the space normally required. And the whole procedure really was as simple as clicking a button. An hour and a load of laundry later, a preview of our entire DV tape was captured to disk. Studio 7 gracefully handled surprises, like changes in the audio format from 16-bit to 12-bit or gaps in time code, by stopping capture and displaying a warning prompt.

Editing the preview footage was easy, but unremarkable. The user interface was clean and uncluttered, but required some learning. Like most sub-$200 editing programs, the gimmicky and animated workspace left us wondering where the Copy button was, for example. Clever interface designs can be confusing since they don’t follow Windows standards which, like them or not, we already know how to use. Although the program does not use the standard Windows-style interface, it is well laid out and was easy enough to learn. Even so, we found ourselves wishing we didn’t have to learn a new interface to edit our footage.


The editing tools are functional and adequate. Studio 7 has a storyboard view for quick layout and a timeline view for more detailed editing and trimming. The timeline has one video track, a titles track, two audio tracks (one for the audio associated with the video and one for voiceovers, sound effects, etc.) and a music track. There are a bunch of transitions and some basic tools for adjusting brightness, contrast and color. TitleDeko, a fine titling application with dozens of presets, is used to generate titles. The audio tracks all have volume envelopes, which allow you to animate the volume of tracks over time, ducking out music or fading the audio in and out.


We were pleased with the included SmartSound music-creation tool. We simply selected a style and duration for our music bed and the software generated copyright-free music to fit the project. You can also insert MP3 files and CD audio tracks directly into the music track, which is fine for any personal use.

Studio 7’s biggest claim is that you only need to click one button to capture a preview of the entire tape; then, after editing your project, click another button to capture the video and render the movie, and one more button to print to tape. The Make Movie tab has a prominent Create button to render the project. When we clicked it, Studio 7 prompted us to insert the appropriate tape. It then went through and captured full-quality DV files of only the sections of the tape that we had used in the low-resolution edit mode. When there were tape changes (or the preview capture was stopped and started), another prompt came up asking for the next tape. Since the automatic capture is based on the time code on the DV tape, Studio 7 will happily capture the footage specified by the time code from the wrong tape. Any occurrence of this error is obviously because of user error and not the fault of the software, however. As long as you have named your tapes and preview files carefully, this sophisticated batch capture process is efficient and worry-free.


After the source footage was captured, rendering began. Studio 7 first rendered clips with effects and speed changes, then all of the transitions, and finally our titles, which rendered very quickly. At this point, Studio 7 indicated that the rendering was complete and invited us to click the Play button to output the video to tape. By default, the Play button only transmitted DV data and did not control the camera. We had to go into the Settings dialog to allow Studio 7 to control the camcorder and record the movie to tape, as documented in the manual. This is probably a safety concern to prevent people from accidentally recording over their tapes, but could be confusing to beginners who have gotten used to Studio 7 automatically doing everything.

Pinnacle Studio 7 is a fine piece of software for taking the first step into video editing. Although the visually attractive interface can be confusing at times, the innovative capture, rendering and print-to-tape features are excellent.

Hard disk drive must be capable of sustained throughput of at least 4MB /sec. (All SCSI and most UDMA drives will work)