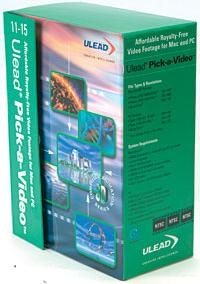 If you want to add a little extra polish to your video project without spending hours designing and rendering 3D elements, Ulead’s Pick-a-Video stock footage library may be the answer. If you are looking for elements to use for video intros, title backgrounds, a production logo or DVD menu backgrounds, there is a lot to work with here. In this review, we examined the 3D computer animation collection, which includes five titles (numbers 11 through 15 of the series): 3D Geometry, 3D Liquid, 3D Feature Intros, 3D Universe and 3D Digital Age. Each title contains approximately 15 clips, with run times of eight to 20 seconds. Twenty of the clips are loopable, so you can run them continuously without detecting an obvious beginning or end.

Ulead’s entire stock footage library consists of 21 titles, sold individually or in five collections. Each title has three CD-ROMs: one with type-1 DV AVIs, one using MJPEG compression and one application disc that includes a printed index with frames of each clip.

As a whole, we were impressed with the quality of the elements in the 3D collection. Some clips were clearly better looking than others were, but many videographers will find them handy. The 3D Digital Age title puts technology into imagery in a creative fashion with gears, techno tunnels, glowing data streams and luminescent time-code effects. 3D Intros has a couple of traditional curtain-raising scenes as well as flying film reels. 3D Geometry and 3D Liquid are wonderful sources of background clips, while 3D Universe offers some great spinning earth clips, galaxy fly-throughs and space ships.

There are about four clips that act as variations on a theme, meaning that the same elements are reused creatively in a different animation. We found that some of the loopable clips didn’t loop automatically, and locating the looping point on those clips wasn’t always easy. We also noticed that the clips were drawn and framed at 720×480, without any consideration for television masking. For 90 percent of the collection, this is irrelevant, since the clips function primarily as backgrounds. The beautiful curtain-raising animation is marred by this oversight, however, as the curtains will stretch well off the edge of a television monitor towards the end of the animation if they are not re-cropped to fit.

Whether you want something to simply add eye candy to your project or seriously contribute to your message of your video, these clips can have an impact. We thought that the metallic spinning globe would be a great element in a newscast-type opening. Any of the 3D Intros, when combined with your titles, would be great first-play pieces on a DVD and the abstract animations on the 3D Liquid disc would make spectacular professional-looking background elements on a DVD menu screen.