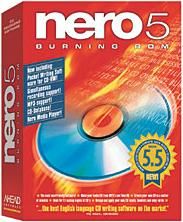 Before we get into the meaty specifics of Nero, let’s just get straight to the point: if you’re interested in creating Video CDs (VCDs) with your CD burner, Ahead Software’s Nero 5.5 is probably the best $49 you will ever spend on getting this task completed. (Note: the box version is $69.) Those who have tried to navigate the nearly-impossible maze of specific requirements for VCD file structure and encoding will appreciate the way Ahead Software has made it all simple with Nero.


Not that Nero 5.5 is only designed for creating VCDs. This product boasts an impressive range of capabilities for all types of CD-burning applications, from creating 80-minute music CDs to DVD data burning as well.


But let’s not get ahead of ourselves; we’re here to see what Nero has to offer the average digital videographer, not to bury you in details.

When you first open Nero 5.5, you’re greeted with a software wizard that’s designed to help you with the application’s numerous options and capabilities. Following the prompts to the VCD option, you eventually reach a screen with a standard Windows file browser on the right and two windows on the left. One shows the complex VCD directory structure, and the other, a Track window, shows the video files to burn onto the CD.


At this point, you can drag video clips (.avi or MPEG) into the Track window. A blue bar appears along the bottom of the screen to indicate how much available space remains on the CD for more video clips. If your videos are not properly encoded for VCD (MPEG-1, 352×240 resolution, etc.), you can use Nero’s built-in MPEG encoder to prepare them. It also features an optional MPEG-2 encoder for the creation of Super VCDs (a format popular in Europe and Asia).


If you’ve ever tried to make your own VCDs, you should stand up and applaud right now; the process of VCD creation has never been simpler.

Many home DVD players have the ability to play VCDs. If you simply burn your CDs using the above method, you’ll get a VCD that simply plays all the video files sequentially when you insert it into a VCD or DVD player. If you have a series of video clips you’d like to access with a menu, Nero’s VCD menu-creation system, known as authoring, has got you covered.


For our test, we created a simple graphic and used it as a backdrop for the menu. Finding the menu-creation portion of Nero was a little difficult. It was buried in the File menu under a heading titled "Compilation Info;" not very intuitive, to say the least. Enabling the menu-creation part of the software was simple from that point forward. With Nero, you can either have the software automatically select thumbnails from the first frame of each clip on the CD, or you can select your own thumbnails from the clips (very handy if your movies fade-in from black). Nero then compiles a simple list of titles that you can click through with the controls on your DVD player’s remote.


Nero also includes a simple, but very handy CD-labeling tool, which you can use to create and print your own CD labels. Predefined templates for jewel-case covers as well as circular labels for the CDs themselves provide a simple way to create nice-looking labels for your creations.

Nero now supports DVD burning as well. With the appropriate installed DVD-recordable hardware (coming soon to a computer near you), Nero can burn data to DVD-R, DVD-RW and DVD+RW discs. Nero still cannot, however, automatically create the directory structures or encode the video for DVD-Video discs that play on stand-alone DVD players (as it does for VCDs). Nor does it have DVD-authoring features, something that you would not expect in a $70 application. (DVD authoring applications can easily hit the $1,000 mark as of this date.) So, while you will not be able to use Nero for creating DVD movies, you can use it to back up the huge quantities of media in your projects and clean up your hard-disk drives.

Though Nero is indeed a great solution for creating VCDs, a few words of caution are in order. Nero is very user-friendly, but certain portions of the program are difficult to work with (the menu-creation software mentioned above is a good example). Also, because Nero aims to be the top CD-burning software in the world, it offers some features that are, shall we say, outside the safe boundaries of what most software would offer. For example, one Nero trait is its ability to overburn a CD (write more data onto a CD than it can normally hold). This may not only ruin your CD, it might even damage your CD burner.


Still, its faults are closely tied to its strengths. Nero is a very powerful product, and a real bargain for the price. Even if you don’t plan to create VCDs, Nero is well worth considering for your other CD-burning pursuits.

Other Hardware: CD-R/RW or DVD-R/RW/RAM