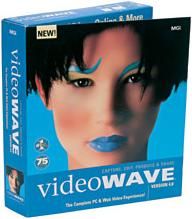 As computer-based video editing has gained popularity, so too have simple and inexpensive editing programs designed for entry-level users. The fact that video editing is quickly becoming mainstream is great news. Major computer manufacturers are now bundling beginner-friendly editing software along with the other standard computer software. This means that more people have access to the creative tools that allow them to express, reflect and document their lives, tell stories and communicate personal messages.

The latest incarnation of MGI’s video editing software is such a program. Aimed at beginners, this slick and attractive package is quite user-friendly. It has great special effects and users can import all sorts of media files, including MP3s. Then they can publish their videos directly to the Web, CD-ROM or back out to tape.

Like all inexpensive, beginner-oriented software, VideoWave 4 does have some limitations. Even so, VideoWave 4 should get beginning editors up and creating movies quickly.

VideoWave 4 is comprised of seven different integrated "windows" that allow users to create their projects. The interface has a nice look and feel. The workspace fits nicely on the screen and is not overcrowded.

The Cutting Room window is for trimming clips on the timeline. The Darkroom allows users to adjust the brightness of clips. The Effects window houses the many special effects that users can apply to clips, including picture-in-picture. The Transition window has 60 different transitions, from straight cut to dissolve to swing out. There’s a text window for creating cool titles that crawl, scroll and fly in. In the Audio window, users can add or adjust audio for individual clips. The Capture window enables easy audio and video capture from VCR or camcorder.

Like many simple editing software programs aimed at beginning editors, VideoWave 4 uses a storyboard interface. The Storyboard interface uses picture thumbnails that represent the video clips laid out in order of appearance without describing their duration. To piece together a video using the storyboard, users drag and drop clips into a line. Between each scene are slots for transition effects.

For our test, we created a simple music video. We connected a Sony TRV820

Digital8 camcorder to the FireWire connection on our edit bay (HP Pavilion 9720 with 1.5GHz processor and 80GB hard drive) and clicked the capture window. The software recognized the camcorder immediately. By capturing via the FireWire port, we had machine control, which let us control our camera’s playback function from the Capture window.

Some editing software programs provide the ability to identify a series of shots and batch capture the raw footage from a digital camcorder via FireWire (IEEE 1394 or i.LINK). VideoWave 4 doesn’t. It is necessary to capture your clips one at a time.

After capturing, we selected the 15 clips that we wanted to use for our music video, placed them on the storyboard and headed for the Cutting Room. We chose a few samples out of the 60 different transitions and placed them in between each scene. We added a couple of the motion effects and we were ready for our music.

When we went to the Audio window, we could add up to six sound tracks to a clip and we could adjust the volume in relation to individual clips. Unfortunately, we couldn’t add, adjust or otherwise tweak audio for more than one clip at a time. Since we were making a music video, this feature was a drawback. The only way we found to get around this limitation was to create a movie and then re-import it as if it was one scene; then we could add our music in one go. We found that this limitation isn’t only for music, it applies to other audio, like narration and sound effects, as well.

Although the shortcomings in the audio features leaves room for improvement, at VideoWave 4’s modest price point it is a good introduction to video editing. But if you’re hoping to eventually move into more advanced editing with this program, you will be disappointed. In general, with VideoWave 4, you can test the waters without risking too much expense.