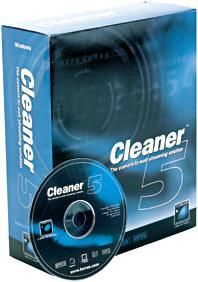 Producers of digital video, be it streaming video, DV, Video CD or even DVD, have long struggled with the proliferation of different formats, codecs, platforms and delivery systems available to them. Wouldn’t it be nice if there was a product that served as a central clearing-house of codecs and file formats, offering the digital video professional a virtual smorgasbord of all the available selections in an easy-to-use product?

In fact, there is such a product on the market today: Terran Interactive’s Cleaner 5, a slick, well-designed piece of software that’s available for both the Macintosh and PC platforms. With Cleaner 5, it’s a simple matter to import a series of digital video clips in almost any conceivable format, and make your selections for codec, file type (such as Windows Media, QuickTime, MPEG, DV, etc.), audio, resolution and more. Then, with the press a single button, the software does all of the work for you. It’ll even let you set up a batch list of files you’d like to convert, or a list of conversions to perform on a single file.

Cleaner 5’s mission is an ambitious one, so we decided to put it through an ambitious series of tests to determine whether it’s worth the purchase price, which is a little steep by consumer standards at $599. What we discovered was that not only is this product worth the price; it’s a must-have for anyone who’s seriously interested in producing video in a wide variety of formats especially streaming video professionals.

Cleaner 5 is easy to use right out of the box. The time required to begin rendering our first project, from inserting the CD for installation to pressing the Start button, was about five minutes.

To begin converting video files, all you have to do is drag and drop your clips from Windows Explorer or from Mac Finder directly into Cleaner. Each file will appear as an item in a large, easy to comprehend list. Then, if you want to do things the easy way, you can use the program’s Settings Wizard to select the type of output you want: Web, CD-ROM, DV tape, Video CD, etc. From there, it’s a simple matter of selecting a few options presented by the Wizard (such as audio, output size, compression quality, etc.), then pressing the Start button to begin your encoding.

If you want more precise control over your encoding jobs, you can skip the Wizard and go straight for the Advanced Settings interface, which gives you complete control over every aspect of the encoding process. Though it’s referred to as the "Advanced" Settings interface, it’s really a simple matter to dial in the exact details you want through a simple system of check-boxes and radio buttons.

Also supported via Cleaner 5 are a number of options for still images (.jpg, .png, .pict, .bmp, etc.) and audio files (.wav, .aiff, MP3, etc.). What you won’t find, however, are hardware-based codecs that address a specific capture card’s hardware, such as the Motion-JPEG codecs used in many older, inexpensive capture cards. The software does, however, provide room for future growth via Terran Interactive’s Codec Central Web site (www.codeccentral.com). Through this site, which is accessible directly via the Cleaner 5 interface, you can easily access any new versions of codecs, so that when QuickTime 10 comes out, for example, you’ll have an easy (and free) way to upgrade your software.

Cleaner 5 also comes with a complete copy of EditDV, a full-featured DV-based nonlinear editing application; EditDV provides an easy way for you to capture footage via FireWire-equipped computers and cameras.

A Couple of Glitches

For the most part, our Cleaner 5 tests went off without a hitch, resulting in a clean, glitch-free video file of the type specified. Some of the more processor-intensive conversions, such as MPEG-2, for example, resulted in long render times (nearly eight hours for a 10-minute clip), and once gave us a system crash on our Pentium II test system. To speed up MPEG-2 render times, Terran offers a hardware-accelerated version of Cleaner 5 that comes with a PCI card to speed up the process. Also, Cleaner 5 comes with an Adobe Premiere plug-in which failed to work on our system.

By and large, however, Cleaner 5 turned out to be a product that we’d gladly recommend to any streaming video enthusiast; it’s a real time-saver that will easily earn back its purchase price.