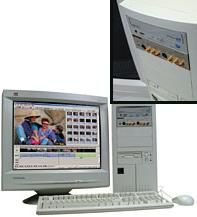 It’s been a rough road for the turnkey integrators who assemble components from multiple hardware and software manufacturers and attempt to mold them into fine-tuned video workhorses. Adding to the difficulty, these computers must support slues of digital camcorders, each requiring specific drivers. However, the dust is settling and stable offerings like the DVStorm from companies like DVLine are answering the call.

The DVStorm turnkey from DVLine is at the eye of the techno-hurricane of prosumer video workstations. It meets the needs of the video professional while still courting the fledgling video enthusiast’s learning curve and pocketbook. This elegantly-configured mid-size tower has all the CPU muscle needed to keep your video and audio projects flowing. DVLine’s Storm solution also bundles many creative software tools to broaden editing skills, add to production quality and offer multimedia output options.

Dual Pentium III 850MHz processors running Windows 2000 support the Canopus DVStorm hardware and its ample software bundle. The DVStorm comes with StormEdit propriety Canopus editing software, and Premiere 5.1 (6.0 will ship with this configuration by the time you read this). StormVideo and StormAudio bundle with StormEdit for digitizing analog A/V and capturing digital A/V. The package also includes Sonic Foundry’s Siren for ripping CD audio and importing it into the editing environment. Also, Acid Music’s loop-based music creation (also from Sonic Foundry) is on board along with Boris Graffiti, Xplode (video F/X) and SpruceUp DVD authoring tools. A pair of IBM 45GB Deskstar IDE drives serve as the storage and playback medium and boast a 37MB per second sustained data rate. With the dual Pentiums and the Canopus hardware, nearly all transitions and filters are presented in real time and multiple text layers in StormEdit display without a hitch.

Setup of the DVLine is very much plug and play. There are standard computer communication cables to the keyboard, mouse and monitor. Altec Lansing speakers connect to the sound card. Hook up a camcorder and an NTSC monitor and you’re ready to edit. The DVStorm, unlike its older cousin the Raptor, has analog video and audio input and output (thanks Canopus!). The DVStorm also has the standard Canopus breakout box that fits in a 5 1/2-inch drive bay.

The only physical drawback of the DVStorm setup is the FireWire connection that transfers access from the rear card to the jack up front. The way Canopus has configured it makes for an extremely fragile input. A FireWire cable runs from the breakout box through the inside of the tower then protrudes out the back to connect to the external FireWire port on the card itself. The unit that we received, either in shipping or by our own hand upon setup, had a damaged FireWire port on the capture board. DVLine replaced the board, showing stellar support for their product, and with a healthy system, we began batch digitizing a list of shots from the StormEdit application out of a Panasonic AG-DVC10 camcorder.

Adobe Premiere 5.1 also accompanies this system and Canopus is in the process of releasing drivers that will support Premiere 6.0. When we used Adobe Premiere 5.1 we found it adequate, but with the opening and closing of some windows the screen did not redraw on our evaluation unit. Consequently, some blank areas would show up in windows intermittently. All of the functions of Premiere worked fine. Until 6.0 is in working order (beta drivers are available now), and can prove differently, the proprietary StormEdit is the best bet for taking advantage of the Storm’s real-time hardware. StormEdit has many great features and is easy to use. The program is logical in its conception and the icons are laid out in an easy-to-navigate palate. Overall, the editing bundle seems deep enough to keep an editor satisfied when working with it day to day.

The shortcomings of StormEdit fall in the audio features as it lacks a waveform view of the audio timeline, making editing of the audio tracks solely an aural endeavor. In our view, this seems to be the biggest drawback to using StormEdit instead of Adobe Premiere. Another minor difficulty that we had with StormEdit was getting used to the position of the overlaying video and title tracks, which reside below the main video track on the timeline. Since most major editing software programs have the opposite arrangement, it felt backwards, but with repetition of use, we concluded that this would be a minimal distraction.

With a list of batch-captured shots, and a few digitized through the analog ports for good measure, we put together a 10-shot sequence with video filters on each clip (slight color corrections). We first used straight 30-frame dissolves as transitions between our shots and placed two separate titles that faded in and out at different times. We added some audio: sound effects, music bed and the natural sound from our video footage. All elements played back perfectly in real time without the need to render any of the effects or titles.

We then began piling on additional effects and titles to see if we could find the proverbial "straw." We created five separate title tracks, two with preset motion dissolving in and out and three static ones with dissolves. On the video track we had our original color effect and added an Old Time Movie filter that gave it lines, scratches and flickers, and duo-tone color. All elements played back perfectly in real time without rendering any of the effects or titles. We moved titles around, placed them over shot dissolve transitions, mixed up their duration and length of fade in and out (all at random) and the DVStorm hardware inside the DVLine workstation didn’t even flinch. The only render we had was with transitions from the Xplode palate, a simple right click on the effect in question and in approximately 10 seconds a 30-frame preset effect was ready for playback.


One Version at a Time

The DVLine DVStorm is a nicely integrated unit. In our experience, DVLine has shown the ability to build a quality turnkey system and give support to its product line.

Although the StormEdit software lacks a viable audio editing interface by not providing a graphic representation of the waveform, it is very stable and has many great features. The DVStorm hardware surpassed our expectations in performance. When Canopus ships DVStorm with Adobe Premiere 6.0, and shows itself a stable performer, it could be regarded as many an editor’s dream machine.