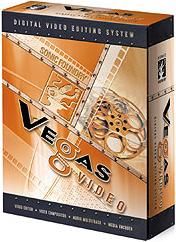 The Ease of the Edit

Sonic Foundry incorporated many aspects of its Vegas Audio interface into Vegas Video. It uses a familiar timeline interface for video editing. In addition, the file management and navigation of your media in Vegas Video’s Explorer window is just as you would find it in Windows Explorer. But Sonic Foundry went a step further and added media-preview enhancements that make file organization convenient, not confusing. The tool bar is also common Windows fare. With Editing, Transition and View icons added to the staples Save, Cut, Copy and Paste – ah, it’s just like being home.

The number of video and audio tracks in Vegas is unlimited, which allows audio mixing and video editing flexibility. Once we started the editing process, we found the functionality of Vegas Video to be quite satisfactory. When we opened the media files into the Explorer area of the interface, previewing and placing them into the timeline was a no-brainer.

The editing tool was intuitive and easy to use. Its functions changed depending on where we were on the screen. With the edit tool in the center of a clip placed along the editing timeline, for example, we could move the clip up and down the timeline. By placing the tool on either edge of the timeline, we could trim the clip. And when we moved to the upper corner of either end of the clip, the tool became a fade tool and allowed us to apply and adjust the in-and-out points. In the upper middle portion of the clip, the tool allowed us to adjust the clip’s opacity level for superimposing one layer of video over another. We also found that we could simply slide a clip over another and they would dissolve together with user-defined properties.

We quickly edited a couple of sequences together and previewed our results. To our surprise, Vegas let us search files, place new media in the timeline, adjusting audio levels and add transitions, while our project was previewing. Many applications do not allow you to do anything (but wait) until previews have been generated.

Another advantage that Vegas Video offers is media integration. With most editing software you have to import media files that you want to use within its interface. If you want to use an .mp3 clip or an .mov file, for example, the program converts the file into something the editing software can understand. This is tedious and time and space consuming. Vegas actually integrates various media files into a project without converting them. So .avi, .mov, .aif, .mp3, .wav and others (see sidebar) can work seamlessly within Vegas Video.

There’s a tendency with video editors to concentrate solely on the visuals. But don’t let the images blind you from its subtler yet equally powerful other half: audio editing. We mentioned earlier that Vegas Video evolved from Vegas Audio. It is its digital audio editing that really sets this product apart from all the others in its category.

Video editors who want to fine tune their audio, typically must endure the crude hacking of their audio tracks in a frame-accurate setting where 1/30th of a second is the smallest increment that audio can be cut into. Their other choice would be to export audio files into an audio-specific program in order to make sample accurate edits. In sample accurate editing the smallest increment is defined by the sample rate at which your audio file was captured, i.e. 48KHz allows you to edit down to an ultra-minute increment of 1/48,000th of a second. After editing sound with Vegas Video, you may never want to go back to editing sound that is merely frame accurate. On the downside, perfectionists may be tempted to spend way too much time tweaking their soundtracks.

Vegas’ sample accurate audio editing uses the same tools as its video editing. The audio effects are good and varied: dynamic (compression/expansion gating), parametric equalization, modulation, reverb and delays; they’re all there. Signals routing to busses and special-effects sends are available to all tracks, although it does lack true automation of effects returns and busses.

Another positive aspect of Vegas Video is its output versatility. Every popular file format is represented so editors can master the finished project to tape, compress it for the Internet or burn a CD-ROM or audio CD. Another big thumbs up for Vegas Video is its "Create an OpenDML (.avi version 2.0) compatible file," which uses a proprietary media file, .w64, that overcomes the file size limit of 2GB that most editing software has. In this version of Vegas Video, MPEG-1 and MPEG-2 are not supported, but Sonic Foundry says they will be included in a forthcoming plug-in.

The video capture utility is easy to use but may not be compatible if the host computer does not have an OHCI-compatible capture card. If this is the case, users will have to use the capture utility that came with their particular cards.

Vegas has a titler that also incorporates key-frames for composite animation. Vegas’ Parent/Child attribute is used to define masks, transparency, opacity and composite with text and video. The on-board video image effects are key-frameable, customizable and very usable, and the transition palate has wipes and other effects.

If we were stranded on an island in the South China sea with Vegas Video – assuming that there was electricity and a pretty healthy PC – we wouldn’t vote it off the island. Vegas Video has what it takes to compete with the best of them.

CD-ROM (if installing from disk)