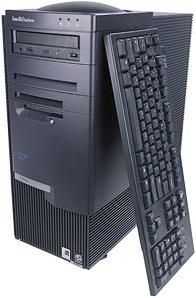 For years Avid editing workstations were the systems of choice for legions of film and television editors. In recent years, Avid has begun creating systems targeted at the digital-hungry consumer market.

Now Avid has teamed up with PC giant IBM to create a turnkey editing workstation based on Avid Xpress DV editing software. This editing suite is only available on the Intellistation and, at this price, is aimed at serious video editors. If you’re not used to Avid, the interface may initially make you uncomfortable. But once you reach the summit of the steep learning curve, you’ll be glad you did. You can do plenty with this workstation.

While a turnkey editing workstation should be ready to go right out of the box, many aren’t. It’s difficult enough for single companies like Apple and Draco that control both software and hardware to make the system clear, simple and easy to use. When two or more companies collaborate on a system, beware: danger lurks.

Fortunately, that doesn’t seem to be the case here. We were pleased to find that the Avid Xpress DV on the IBM Intellistation was indeed a true turnkey system. We simply connected the cables, plugged it in and turned it on. IBM even included a handy foldout sheet with detailed setup instructions. It’s obvious that Avid and IBM did their homework when they collaborated on this machine.

One of the reasons that the price is so high is that all of the parts on the IBM machine are top-of-the-line and optimized for video editing. The Avid Xpress DV on IBM Intellistation comes with a large, 21-inch monitor, built-in speakers, a Matrox Millenium G400 graphics card with 16MB of RAM, 128MB of system RAM and two fast, 7200rpm internal SCSI-2 hard drives: a 9.1GB for the operating system and 18.2GB for video storage. It sports a Pentium III 733Mhz and enough upgrade options so your system can grow along with your needs. It uses the Canopus DVRaptor IEEE 1394 capture card to capture video from your Mini DV camcorder (see the August 1999 issue of Videomaker for a complete review of the DV Raptor). Analog capture is not included at this price. Another reason for the price may be the Avid name. Avid is the Mercedes of video editing.

There are a number of different settings and views so users can customize their project settings. The main editing interface in Avid Xpress DV is the timeline. In addition, you can edit using a storyboard interface if that’s what you prefer.

Xpress includes an easy-to-use titling tool that allows users to create and adjust titles quickly. We easily created some scrolling titles that faded in. It was easy to adjust the title’s size and font and to position the characters on the screen.

Avid Xpress DV has an extensive collection of real-time audio editing tools that makes it convenient to tweak audio on the fly. Users can mix and monitor sound, adjust the pan and volume, raise or lower the gain within a clip and use the equalizer to fine-tune some of the characteristics of a soundtrack.

Like most editing software, Xpress offers a bevy of effects that editors can use to enhance their productions. These include transition effects like fades, dissolves, spins and wipes, all of which can be customized to meet the individual editor’s exact preferences.

One of the outstanding features of Avid Xpress DV is its ability to output a project to a number of different formats. For Web distribution, Avid Xpress DV supports RealMedia, Microsoft Windows Media (.asf, .wmv) and QuickTime/Sorrenson. MPEG-1 and MPEG-2 for use in CD and DVD respectively. To integrate with presentation applications like PowerPoint, Avid Xpress DV generates .avi and QuickTime media. Of course output to tape via IEEE 1394 is also available. In addition, if you’re looking to export video to DVD, the system comes bundled with Sonic Solutions’ DVDit!

The Canopus DV Raptor, while it captures footage adequately, has some innate idiosyncrasies that made us wonder why IBM chose the Raptor as its capture card. When capturing, editing or printing to video, it is imperative that your DV camcorder not only be connected to the IEEE 1394 FireWire port, but also to one of the analog inputs (either RCA or S-video). The reason for this is that the DV Raptor capture card has no hardware codec; and it has no digital-to-analog conversion.

The conversion of digital to analog, which is necessary to view images on your computer monitor, has to occur in the camcorder’s hardware codec. So, in order to play captured DV files, you need the camcorder connected to the card. The displays on the computer monitor are actually analog overlays. The bottom-line with the DV Raptor, is that you must always have your DV camcorder connected to see what you are editing. This may make this system less appealing to individuals that don’t want to have a camcorder tied to the edit bay.

The IBM Intellistation with Avid Xpress DV is a solid performer. Avid Xpress DV is a powerful editing program that can do just about anything you ask, though editors who are used to Adobe Premiere or Ulead Media Studio Pro may be disoriented at first. Because the Canopus capture card does not allow users to capture analog video, this one is exclusively for DV shooters.

If you haven’t been jaded by other editing software, or if you have Avid experience and don’t need to capture analog video, this could be the choice for you. We applaud Avid for extending their high-power editing products into the consumer price range.

*Analog video I/O on Canopus DV Raptor used for monitoring purposes only and will not capture any analog signal.