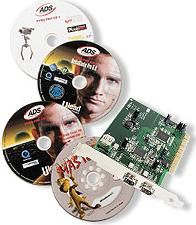 
Like sirens luring sailors to their deaths in the jagged rocks, FireWire capture cards are tempting destinations for video editors who are looking for an affordable and quick way to start editing on their computers. But editor, beware, those reefs can be perilous. We recommend buying a tested turnkey editing system so that all of the configuration problems have been hashed out long before you try to capture your heart and soul through the FireWire ports.

That said, if you’re looking for a moderately-priced IEEE 1394 card to capture video from your Mini DV camcorder, you might be interested in ADS Technologies’ Pyro ProDV FireWire capture card. It’s especially alluring for those who have yet to invest in video editing software since the Pyro Pro comes laden with a whole suite of editing applications that enable you to edit, create 3D animation, music, and make your own special effects.

The PyroPro is a PCI 6-pin FireWire capture card with three IEEE 1394 ports. Two of the ports are located on the back of the card so you can plug in your camcorder or other FireWire device easily. The other port is located internally where you can connect a FireWire hard drive or other device. The card comes with a 6-pin-to-4-pin cable for the simple connection of a Mini DV camcorder.

There’s not much to the card itself. The main things we look for are driver compatibility and any internal conflicts caused between the card and the rest of the computer. You want the card’s driver to be able to recognize your particular Mini DV camcorder. But before we delve into the Pyro Pro’s performance, check out the software that comes bundled with this card.

First off, ADS bundled the complete edition of Ulead Systems’ Media Studio Pro 6.0. This editing package normally retails for about the same price as the entire Pyro Pro package. Then when you’re ready to add music or you want to tweak your audio, you’ve got SoundForge XP 4.5 and Sonic Foundry’s ACID Style for creating looped music. You can create your own transition effects with Pixelan’s Spice Master Lite. Then for making special effects there’s Boris FX limited edition and Martin Hash’s Animation Master 2000, 3D character generator and animation software. So for about $500, you get not only a FireWire capture card, but you get nearly $1,000 worth of video software.

Once we opened the box, we installed it into the PCI slot in our test-bay computer, which consists of a Pentium III 550MHz with 128MB RAM, a Matrox G400 video card, an IBM UltraStar 9GB 10,020rpm SCSI and Windows 98. Then we installed the software. It comes on four CD-ROMs and installation was quick and painless. We hooked up a Sony VX2000 to the FireWire cable that comes with the Pyro card and used it as both our source and destination deck. But when we first set up, we couldn’t get the card to recognize our camcorder.

The manual states the Pyro Pro will run on Windows 98, 98 SE and 2000. ADS recommends using the Microsoft DV camcorder driver, which works only on Windows 98 SE or 2000. But in case you’re running Windows 98, they also included the Texas Instruments camcorder driver that will recognize most camcorders. If you use the Microsoft driver on SE or 2000, the driver should provide you with full machine control and batch capture. When we used Windows 98 with the TI driver, we got machine control but no batch capture.

Sure enough, when we installed Media Studio Pro on Windows 98, the Windows driver wouldn’t recognize our camera. So we installed the Texas Instruments driver and set it up. We then plugged in the VX2000, set it to Playback and plugged in the FireWire cable. The new driver recognized the camcorder without hesitation and we were able to start capturing. We suggest, as do the ADS tech guys, to use either Windows 98 SE or 2000 so you can take advantage of batch capture, however.

Once we customized Media Studio Pro to our liking, capture went without a hitch. When we finished capturing, saving and renaming our video files, we opened them up in Media Studio Pro and made a few simple edits and then output them back to tape. Everything went well and the quality of both the capture and output was fine. No dropped frames were reported and we saw no apparent image problems.

At this price, the Pyro Pro is a real steal, especially if you haven’t invested in any video editing software yet. If you have, you may want to shop around since the bundled software is the real bargain here.