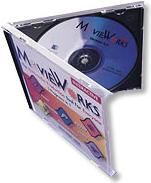 MovieWorks 4.6 from Interactive Solutions is a complete multimedia authoring software package for just $99. MovieWorks is targeted at Mac users who want to produce streaming slideshows and QuickTime video for streaming. Its price and relative ease of use might appeal to beginning video editors, but its primary purpose is to create multimedia productions for distribution from one computer to another via the Net. Its end product is not suited for distribution on full-screen, full-motion video on VHS tape. If you are looking for a serious video editor, this ain’t it. If, however, you want to make a sharp-looking interactive Web slideshow, MovieWorks may be exactly what you are looking for.

Five Apps for the Price of One

MovieWorks 4.6 is actually a collection of five multimedia authoring applications. The disk includes the main MovieWorks interface for creating text, adding effects and sequencing media, as well as applications for 2D cell animation, paint, sound and video editing. You’ll need to be sure that you have QuickTime 4 or higher installed on your Mac. MovieWorks uses Apples QuickTime as the foundation for all its projects.

We tested MovieWorks on a G3 500MHz PowerBook laptop with 128MB of RAM and a 12GB ATA-66 hard drive. Interactive Solutions says the software will run on any Power Macintosh with 12MB of RAM, 10MB of drive space and the obligatory CD-ROM drive.

MovieWorks is an excellent tool for creating Internet slideshows. We were able to import a series of stills and assemble a high-quality slideshow presentation with titles, music and narration in less than an hour after installing the software. To build a project, we simply dragged images and music files to the work area. We then opened the sequencer to make adjustments. The software allowed us to select a textured "frame" and background color for our slideshow. The timeline-style sequencer let us click and drag to adjust the duration of still images and titles. And for a quick assemble, we selected a number of clips at a time and it then automatically sequenced them for us.

The program includes a variety of basic transition effects, like dissolves, horizontal and vertical wipes and blinds that a user can select and apply to the beginning and end of each image. These effects do not seamlessly bridge images in a way that video editors might expect. Each effect wipes to and from the background texture between pictures (yes, this is normal for slideshows). The tutorial even lists URLs to visit so users can post their clips directly to the Web. Very cool.

MovieWorks does have video-edit capabilities. It allowed us to assemble video projects in much the same way that we assembled slideshows. For our test, we captured a series of five 720×480 video clips from a Mini DV camcorder (the JVC GR-DVL9800) through our PowerBook’s FireWire port. After capturing our clips, we clicked and dragged them from the desktop into the MovieWorks’ work area and opened the timeline-style sequencer to arrange their order. As with the slideshow, we found that we could use the automatic sequencer to quickly spread the clips and butt them up one after the another. We were able to create a sequence of our raw footage, rather quickly.

Trimming video clips is not as straightforward as trimming still images, however. We could not change the duration of a video clip in the sequencer. To trim a piece of video, we had to highlight the clip, then select Open Editor from a pull-down menu. This opened a new player window. With the shift key pressed, we could click and hold the mouse button to scrub through the clip and define the portion of the footage that we wanted to delete. After we trimmed a clip to our satisfaction, we had to open another pull-down menu and make the proper selection to send the new version of the clip back to the MovieWorks interface. The new clip now appeared in the sequencer. At first, we felt the clip trimming process to be awkward and clunky, but we quickly got used to the process and were able to select, trim and replace clips rather quickly.

Adding music to our project was easy enough. Once we captured music to the computer from the CD-ROM drive, we dragged the audio file to the work area and it appeared in the sequencer. The audio controls are rather limited from a video-editing point of view. We were able to adjust volume by highlighting the sound clip and selecting Attributes from a pull-down menu. The volume of an entire clip can be raised and lowered, but we couldn’t raise or lower portions of our music bed. Any changes that we made affected the whole clip. Audio clips cannot be trimmed in the sequencer like stills or in the editor like video clips. We found an "Extend to End" checkbox in the Attributes window that matched the length of our music to the visuals in our project. This was a nice touch, but it caused our music to cut off abruptly at the end of our last visual. We were not able to fade our music in or out.

As a cuts-only editor, the MovieWorks video editing application worked adequately, but we were disappointed to find that the transition effects used to bridge video clips operated exactly as they did when we edited our slideshow. Instead of seamlessly bridging two pieces of video, as you would expect, each transition effect caused clips to fade or wipe to and from the background color.

After assembling our project, we attempted to record the edited version back to our DV camcorder from the computer’s built-in FireWire port. According to the MovieWorks tutorial and Web site, the process should have been as easy as selecting Export to DV from the Scene menu and playing the project. We were able to render and save our project to the desktop, but after numerous attempts with various DV camcorders, we were never able to record our project back to tape.

As a multimedia producer for creating Web slideshows and as a sequencer for assembling less-than-full-screen QuickTime movies, MovieWorks is a great, inexpensive tool. But if you want to edit video for the Web and output to videotape, you’ll need to look elsewhere.