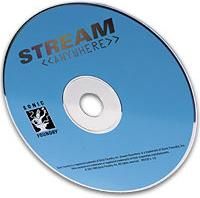 The Internet is an exciting prospect for those who want to share video with an unlimited audience. Unfortunately, few people know much about creating streaming media for the Web. With Sonic Foundry’s new product, Stream Anywhere, you don’t have to know much about streaming to get your moving images on the Web. Aimed at those videographers who have some experience with the workings of the Web, but little experience with Web video, Stream Anywhere is a streaming newcomer’s dream come true.

Stream Anywhere is a nifty little tool for taking existing videos and converting them to either Windows Media Technologies 4.1 or RealNetworks RealSystem G2 files so you can upload them to a Web site for people to view.


Getting Ready to Stream

Installation was painless for us: we inserted the CD into our Win98 test system (Celeron-433 with 80MB RAM, NeoMagic MagicGraph 128 video card), and the setup application did the rest.

The system requirements for Stream Anywhere are significantly lower than a lot of other software that we review. For someone wishing to prepare a large quantity of video clips for streaming, that older computer you have in the corner will do just fine, leaving newer equipment free for editing.

When we opened Stream Anywhere, the first thing we saw was its main window, with a preview screen on the left and a set of configuration tabs on the right. We could bring clips into the program by using the menus and dialog boxes, by dragging and dropping or by capturing directly into Stream Anywhere.

After we loaded our source clips, creating a streaming file was as simple as pushing a couple of buttons. When we clicked the "Save as Streaming Media" button, the streaming wizard walked us through the choices for creating both a Microsoft Windows Media Technologies file (.asf) and a RealNetworks G2 file (.rm), simultaneously. Each format can have its own independent settings, and we were free to choose different qualities for audio and video, optimizing various versions of the clip for any modem connection that viewers might have. While choosing to use the wizard did limit our choices, it was very fast and very easy to get results.

We chose a single, five-minute clip and chose to create files suitable for 56Kbps connections. In less than a minute, we had both Windows Media and RealSystems files ready for upload to our Web site.


Exploring all the Options

Obviously, making the best streaming media files requires going beyond the automated and simple choices of the wizard. Stream Anywhere does offer many options to help you get the most out of your streaming video file. After gaining experience by using the wizard, we began exploring all of the options that Stream Anywhere offers.

We could adjust the volume, sweeten the audio with the built-in three-band equalizer or perform normalization, which narrows the difference between the loudest and the softest aspects of a sound track. Re-sampling using Sonic Foundry’s proprietary algorithms can maximize audio clarity in the streaming file.

We found the array of preprocessing options quite impressive for a product of this type that let us tweak our streaming video to our hearts content. We could choose almost any values for black and white restore settings; these are essentially cutoffs, which help eliminate artifacts from appearing in the "nearly-white" or "nearly black" areas of images. We adjusted the clip’s overall brightness and contrast levels. There was even the option to de-interlace video that was captured from NTSC or PAL composite sources. We smoothed our images by using a built-in median blur filter. This works by replacing each pixel with the median value of the surrounding pixels. It also gives you the ability to compensate for non-square pixels.

Stream Anywhere also allows you to crop clips (showing only the most relevant portion), apply audio and/or video fades or mark whatever in and out points you want. Using a .tga (Targa) or .bmp (Bitmap) file, you can apply a watermark to the file, making sure that people would know who had created it.

When creating a RealSystem file, we could add a title, a copyright notice or our name as author of our presentation. We could also define an area that would act as a hyperlink to either another streaming clip, a Web site or to a particular point in the present clip. When creating a file for Windows Media Player, we could add text that would appear as headlines on a Web page or as closed captions. We could also define a hyperlink, which, when a viewer clicked it, would cause a specific page to appear in the viewer’s Web browser.

We would have liked to have had the ability to adjust the black level (set-up) and gamma level. Being able to adjust chroma and hue might also have been nice, especially when trying to tweak the look of your streaming media to fit into the design of your Web page.

Even though Stream Anywhere does support both RealNetwork’s SureStream and Microsoft’s Intelligent Streaming multiple bit-rate encoding, it would still have been nice to have the ability to automatically create a set of several single bit-rate media files. QuickTime Support was noticeably absent as well.

We found the lack of a "one-button publish" solution to be Stream Anywhere’s greatest drawback for newcomers to streaming. Since it depends on the user to possess a Web site, or to be in the process of developing one, it is not a complete solution. While it is a great tool for preparing the media files themselves, it is still up to the user to provide the media files to publish to the Web.

Overall, we found Stream Anywhere to be another good and useful product from Sonic Foundry. While it did far more than simply convert file formats, its rich feature set still left us wanting a bit more. The other products in this category are either comparably priced, but with fewer features (or lack the ability to create both Microsoft and Real file formats) or more expensive. Stream Anywhere is not quite as easy as it could be, but it is a great package for someone who wants to deliver streaming video and audio over the Web.

CD-ROM drive (if installing from disk)