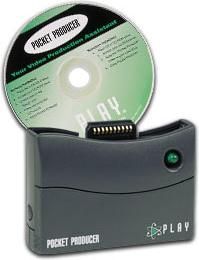 Logging shots accurately can be a tiresome task. Pocket Producer, a new product from Play, makes logging easy, and it’ll help you in the edit bay too.

Although its price may be a bit steep for the casual video producer, Pocket Producer is a handy tool for anyone who shoots to edit. Intermediate and advanced users will fall in love with it. Using a gadget like this, based on the popular Palm series of Personal Digital Assistants (PDAs), could make going back to the clipboard and pen positively painful.

What’s in the box (and what’s not)

Pocket Producer includes both software and hardware. The software is a pair of programs: one for your computer, and one for your Palm device. The hardware is a pod attachment for your Palm and a set of cables for connecting the pod/Palm combo to your camcorder or deck. What is not in the box is the Palm device itself. If you don’t have one, plan to lay out another two hundred bucks or so to be able to use Pocket Producer.

The first step to using Pocket Producer is to install the software: first on the computer, then on the Palm. Installation was a breeze for us on our test machine: a Gateway laptop with a Celeron 400, 80MB RAM and a 10GB hard drive running Windows 2000. After a very quick and simple installation to the computer, we installed the software to the Palm through the "HotSync" facility of the Palm itself. ("HotSync-ing" refers to the means of keeping data up-to-date on both the Palm and computer through a special cradle and cable.)

Pocket Producer is available for both Windows and Macintosh computers, although it should be noted that new Mac-based Palm users will need to obtain a "MacPack" in order to HotSync the device to their Macintosh.

Shot logging, or as some refer to it, "inventorying", allows the editor to find out what the shooter got, and provides a reference for anyone looking for a particular shot in the future. Logging can be very beneficial, not only for the quantitative data about each shot (starting time code or counter time, duration, ending count, etc.), but for the qualitative data as well (good shot, ok, bad take).

Many producers skip a true logging session, preferring to log "on the fly" during their initial capture and rough-edit sessions. Some reasons that people don’t take the time to have an actual logging session are the tedium of it, the "double effort" effect of writing down all the logging data, only to have to re-enter at capture, and the fact that it isn’t a big help in their upcoming editing sessions.

Pocket Producer addresses all three of these objections, encouraging more logging sessions. With automated logging, the tediousness of writing down each shot is eliminated. The digital shot log can then be used in your batch capture session, as well.

After you’ve shot your material, simply connect the "pod" to your Palm device, then connect to your camcorder or deck via Control-L (LANC) or RS-422 control ports. Using either LANC or RS-422 allows the Palm/Pocket Producer pod to control the deck while logging.

Once connected, you have a few options to set, which Play’s manual describes and explains well. In fact, throughout their manual, Play has taken the time to explain most technical concerns and to de-crypt acronyms. The other documentation in the package includes a fast-start guide, a pocket reference card, and more.

Now you are ready to begin logging. While playing each segment, you can mark in and out points and assign a name or number to each clip for batch capture. As you work, Pocket Producer stores all your shot data on the Palm. You can log footage from several tapes, identifying each with a unique reel number.

After you’re through logging your footage, you HotSync your Palm device again, which transfers the logging you’ve just performed onto your computer. Next, run the LogWriter software included with Pocket Producer, to create an EDL (edit decision list) in any of several formats, including Adobe Premiere, Avid, Media100, and more. Now you can begin using your automatically created, accurate shot log to perform your batch capture, or use the shot list to create a custom manual capture.

The design of the Pocket Producer, which closely resembles the original PalmPilots, as well as the packaging and documentation, all project a sense of fun, which seems appropriate for a company named Play. They have even included a "Palm Pilot’s License," which promises to "reduce any jail time you may receive" for "Speed Logging" and "creating EDLs while riding in a moving vehicle."

While the packaging is hip and modern looking, the pod for Pocket Producer has the square, chunky look of older Palm models. The newer devices, such as the Palm III, V and VII series have a sleek look. Play’s documentation indicates that only the older PalmPilots and the III series of the newer Palms are currently supported. There is no indication of plans for future support for the V or VII series. Maybe the next version of the Pocket Producer will have a new shell that matches the look of the new Palms.

Play’s excellent documentation also provides an overview and a quick-start guide for people who have only acquired a Palm device to be able to use Pocket Producer. They provide a glossary, which defines technical terms and acronyms used in connection with this product, as well as a list of supported LANC-equipped camcorders.

The quick-start guide breaks the operation of Pocket Producer down into six simple steps and presents them on a card with brief instructions and simple graphic depictions.

Play has built a solid product, which takes a tedious job and makes it simple, accurate and more productive. Pocket Producer is the sort of thing almost any pro can use everyday, yet it is simple enough for an amateur to use.

Anyone who has ever dreaded logging footage, or who chose not to log, will find Pocket Producer an amazing time-saver. Anyone who has never logged a shot, and wants to speed up capturing and editing can avoid one of the more tiresome practices of the past.