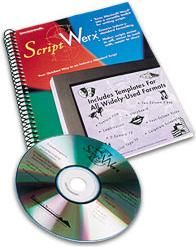 One of the most commonly overlooked aspects of making video is pre-production (planning). Most videographers and hobbyists instead prefer to concentrate on production (shooting) and post-production (editing). But the pre-production stage is the place to make a blueprint for your project to set yourself up for success rather than failure.
If you’ve ever written a script on a word processor without scripting software, you know how frustrating it can be to format your text in a way that works well for making video. ScriptWerx from Parnassus Software turns Microsoft Word into a versatile pre-production toolkit that can help you write industry-standard scripts, organize your shots, brainstorm and storyboard your projects. Best yet, it’s simple to install and easy to use. ScriptWerx provides a valuable tool to anyone who writes scripts, whether for a Junior High production team or a major Hollywood studio. ScriptWerx is an affordable tool for all levels of videographers who want to map out the success of their projects.

ScriptWerx is not a stand-alone product. It works within Microsoft Word for Windows or Macintosh. We reviewed the Windows version. Installation was a snap. We stuck in the CD-ROM, double-clicked the install icon and in less than 10 seconds, we were ready to go.
ScriptWerx is comprised of 11 different templates that you open in Word. There are templates for two-column, television-style, four-column, corporate style, feature-film style, combination and live-tape style scripts. Besides those, there is a storyboard template, and templates for writing on-air questions, research questions and script treatments.
One of the coolest things about ScriptWerx is how it works within Word. Once you select a template, ScriptWerx adds a set of tools to the menu bar to let you organize your script. We opened the video-specific, two-column template to jump right into our test. The screen is divided into two sections. The left side describes the visuals with shot information, time and location, while the right side has all of the audio, including character lines, narration, sound effects and music. This is the typical format that most videographers would find useful. When we opened the template, it asked us if we’d like to follow the online guide to help learn how to use it. Within one minute, we had a good enough grasp of how it worked, to try it out alone.

Storyboarding and Other Cool Tools

ScriptWerx uses your script to generate a number of other useful tools and reports. We created a dummy script, called The Three Bears, to see just how ScriptWerx works. We opened with an establishing shot of the Bear family’s house in the middle of the woods. In the audio column, we opened with some music. For our test, we created a series of 12 shots. We included descriptions of each shot as well as all dialogue, music and sound effects.
With the script finished, we were ready to create a storyboard. In the menu bar, there’s a customized tool bar that allows you to choose specific options for ScriptWerx. We selected storyboard and the dialogue box asked us if we wanted the two-column or three-column storyboard. The two-column storyboard has a number of frames on the left to draw representations and a column on the right for audio. The three-column style has smaller frames for pictures as well as additional columns for visual and audio descriptions.
Because we wanted to have more space to draw, we chose the two-column format. We pressed ok and we had ourselves an organized storyboard template, complete with all of the audio notes that we needed for all 12 of our shots. Now we just had to draw a rough representation of our shots in each box and we’d be ready. One of the cool things about creating a storyboard template with ScriptWerx, is that we could print out the storyboard that we just generated and draw with crayons or pencil, or we could import drawings we made in the paint program that comes with Windows. We opted to forego the crayons and used a combination of paint and clip art to depict our story. It would have been nice if the ScriptWerx software included some clip art elements to make storyboarding a little easier.
Next we used our script to generate a shot list to use in the field. By choosing Shot List in the menu bar, ScriptWerx generates a detailed list, noting shots on the left and audio on the right. This is a useful tool to help break down the production schedule. There’s another useful tool that can help videographers, the Prompter List. By choosing Prompter List in the menu bar, ScriptWerx once again automatically culled all of the dialogue from the script into one neatly organized document that we could print and use like cue cards.

Since pre-production is so overlooked, underestimated and just plain ignored, it’s refreshing to find a project that makes the process easy. If you’re familiar with Microsoft Word, ScriptWerx won’t intimidate you. The familiar interface lets you concentrate on your script, not on learning how to use the software.