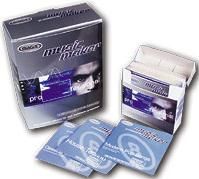 If you want to add music to your video productions legally, you have a few options. You can purchase a buyout music CD, record music yourself or use a computer to help you make royalty-free music. MAGIX Entertainment?s Music Maker Professional will help you make good sounding original music mixes, from almost any computer.

Video producers, like commercial producers and event videographers, who need a variety of music, will appreciate Music Maker Professional?s features. Internet multimedia producers can use it to create streaming video files, incorporating both music and effect-laden video. Let?s take a look at this interesting piece of software.

The minimum system requirements for MAGIX Music Maker Pro are very basic. Almost any computer that can run Windows95/98/NT can run Music Maker Pro. The manufacturers list a Pentium 166MHz with 32MB RAM as the minimum. They don?t list recommended system requirements, but this software takes 10MB more RAM than Windows requires to run, so if you have 64MB RAM, you shouldn?t have any trouble.

Installing Music Maker Pro is a simple process. The designers of the software were careful to make sure it doesn?t automatically overwrite your QuickTime or DirectX files. Overall, the installation process is simple and straightforward, and shouldn?t intimidate anyone who is even vaguely familiar with computers.

Each CD contains between 250 and 1600 samples. These come in categories such as house/techno, modern pop, classical elements, ambient/jungle, ambient, big beat/drum?n?bass, rock/rockpop and hip hop. There are also two CDs worth of natural and synthetic effects. In addition, there are four CDs of video elements. These include three CDs of 720×576 video and one CD of 320×240 video. More on incorporating video later.

To make music with Music Maker Pro, you simply follow the prompts. It will prompt you to enter the sampling rate and number or tracks you want. You can choose between 44.1kHz (CD quality) and 22kHz, stereo or mono. You can also choose either 4, 8, 16, 32 or 64 tracks to use. The main reason you wouldn?t want to use 44.1 kHz, stereo and 64 tracks is that it will make the file size very large. If you are squeezed for hard drive space, you might want to consider using the 22kHz sampling rate.

Next, choose the elements that you want to use in your audio track by dragging them onto the timeline interface. People who already do nonlinear editing will have no trouble with the concept. The waveform of the sample will appear in the timeline, and then you can stretch the sample to fit the amount of time needed. You might start with a drum beat, throw in some bass, add some keyboards and maybe a guitar or a turntable.

The samples have a naming convention that will keep your music in tune and give you the option to have more than one instrument sample in each key. As long as you keep your melodic instruments in the same key, your music won?t sound like an elementary school band. You can also include various effects, cross-fades and other audio tricks using Music Maker Pro?s audio features. After creating your score, you can export it to a variety of formats to use in nonlinear video editing programs, or to put on the Web.

Music Maker Pro has some simple-but-cool video features. You can drag a video clip onto the timeline and edit it much as you would an audio track. A preview windows opens, and you can apply a variety of filters and special effects to your clip. To get you started, MAGIX includes four CDs of video clips featuring stock footage and various visual elements. With a capture card, you can import your own video too. Although you may not want to use Music Maker Pro for complicated video editing, you can do all the basics with it. Cuts, fades titles and various effects are all included.

Perhaps the best use of the video features of Music Maker Pro is to synchronize video to the audio that you?ve created. You could put your video onto a track, and as it plays in the preview window, time the big changes in your music to match.

Music Maker Pro?s music creation capabilities can be used to create interesting, royalty-free music. Non-musicians won?t have too much trouble working with it either. It costs about the same as a decent buyout music collection, but has so much more to offer. The fact that it includes some basic video editing capabilities will make it even more appealing to new video producers. When you add in its ability to create streaming audio and video files, this program could find a home in the software libraries of many videographers.