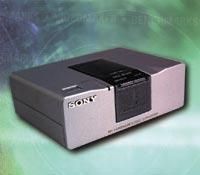 The concept is simple enough: a small box with IEEE-1394 FireWire and analog audio and video connections, designed to convert analog a/v signals to digital, and vice-versa. Sony’s DVMC-DA1 Media Converter is both easy to use and effective.

Housed in a small gunmetal-gray plastic box, the Media Converter takes up very little space. Two simple buttons, labeled DV In and Analog In, are placed on top of the box, along with a pushbutton power switch. All inputs and outputs are located on the back of the box, which makes them a little harder to configure than if they were on opposite sides of the device. Inside the box, the Sony hardware DV codec lay in wait for some media to convert, so we fired up a DV camcorder and put it through its paces.

Our first test was to convert a DV camcorder’s FireWire output to analog. While this may seem like a silly thing to do (because most, if not all, DV camcorders have analog outputs), it does have some useful applications, like providing a FireWire input for an analog video device, such as a monitor or a VCR. This could allow direct recording of a DV signal’s output from a nonlinear editing computer directly onto analog tape, or NTSC monitoring of a nonlinear project on a computer that has only IEEE 1394 and no analog video output. This test was completed without a hitch; the Panasonic PV-DV910 and Canon Ultura test cameras we used worked perfectly with the Media Converter in the digital-to-analog direction.

Next came the analog-to-digital test. This was broken into two parts: recording of analog video and audio material onto DV tape (using a DV camcorder as a record deck), and recording of analog video and audio onto a computer’s hard drive via FireWire capture card. Again, recording analog video onto a DV tape via FireWire worked perfectly, but our first attempts to record analog video onto our test computer’s hard drive failed, although this had nothing to do with the converter. It’s due to the fact that IEEE 1394 capture cards must have specific drivers written for each device they encounter. Once we told our test system’s capture card (the DPS Spark Plus, reviewed above) not to expect a specific camcorder, the process went smoothly, and we were able to capture video onto the hard drive. Of course, we were unable to use device control, batch capture or any other feature except the ability to record the video onto the hard drive.

A word of warning: if your computer has a FireWire input, but no video capture software of any kind, you won’t be able to use the Media Converter until you purchase a nonlinear editing software package to act as an interface for the Converter. Owners of the Apple Macintosh G3 or G4, in particular, may wish to pay special heed to this warning, as a number of Macs shipped with FireWire ports but no video capture software.

We found the Media Converter to be all it’s cracked up to be: a simple way to incorporate analog footage into a DV editing system–if you can afford it.