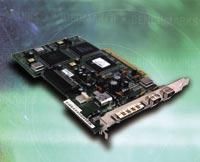 DV Plus SCSI — DPS Spark Plus

Way back in 1997, we tested a product that was among the first-ever FireWire DV capture cards for PCs: DPS’s Spark. Since then, the Spark product line has gone through a few software upgrades. The DPS Spark is now available as the Spark Plus, a version that includes an onboard SCSI host adapter as well as a FireWire capture device.

The Spark Plus comes bundled with DPS’s Video Action Pro 6.3 nonlinear editing software, as well as Sonic Foundry’s Sound Forge XP 4.0 for audio editing. When we installed the board in our Benchmarks test computer (Pentium II 400 MHz, 64MB RAM, 9GB SCSI capture drive, Windows 95), we found its operation to be buggy in some ways, but otherwise reliable.

The Spark Plus’s hardware component is an Adaptec 8945 PCI card, which includes both an IEEE 1394 interface and a built-in Adaptec 2940 Ultra-Wide SCSI adapter. This marks the Spark Plus as a product that’s specifically targeted at people who would like to upgrade an existing Pentium computer to handle both DV input and a SCSI hard drive. Many older Pentiums are unable to make use of the lightning-fast Ultra ATA drives that have recently matched and eclipsed the speeds of SCSI drives; owners of these types of computers who wish to upgrade to nonlinear without buying an entirely new system are the Spark Plus’s primary market focus.

After plugging the Spark Plus into our test computer, we encountered a problem. The SCSI portion of the Adaptec card worked beautifully from the beginning, but Windows 95 had difficulty recognizing the IEEE 1394 hardware at first. A removal of the drivers followed by a second attempt at installation, however, proved successful, so we proceeded to install the included Video Action Pro 6.3 software and try it out.

The Spark Plus comes with its own capture software, which has a handy graphical user interface that’s dominated by a preview window, a set of standard point-and-click VCR controls and a time code display that’s switchable between total frames and a standard SMPTE time code readout (hours:minutes:seconds:frames). When we attempted to use this capture software, the preview display window simply wouldn’t work. All other aspects of the software worked perfectly; we were able to control the camcorder, capture clips and even set up batch capture lists that worked beautifully. Unfortunately, the only way to view the video while we performed all of these actions (without resorting to setting up a separate video monitor) was on the tiny little LCD monitor of the Canon Ultura Mini DV camcorder we were using for test purposes. Thinking that this may have been due to the specifics of the camera we were using, we switched to a Panasonic PV-DV910 for our input device, but to no avail. Finally, we downloaded the latest version of the Spark drivers from the DPS Web site and installed them, but still got no image in the preview window of the Spark’s own capture software.

Still Buggy After All These Years

In spite of the rather serious drawback of not being able to monitor video on the computer screen as you capture, the Spark Plus performed well in all other ways. It installed itself flawlessly into version 5.1 of Adobe Premiere, which was a great timesaver. It had no problems controlling the VCR functions of every camera we connected to it. As for the problem with the capture preview window: a call to DPS revealed that the latest version of the Spark drivers simply doesn’t support preview capabilities. Earlier versions of the drivers (available at DPS’s FTP site at ftp.dps.com) support preview, but not batch capturing. A note to this effect slipped into the manual might have saved a lot of frustration for potential installers of this device.