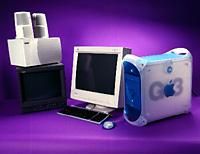 
You’ve seen them on TV, perhaps you’ve even lusted after one in person. Of course, we’re talking about the new Apple G3s. Those big blue towers have a way of making everyone suddenly need a new computer. So when we found a turnkey nonlinear editing (NLE) system based on one of the new G3s, our interest was piqued.

ProMax System’s FireMAX Studio Core System is a well-packaged deal that includes just about everything you need for NLE. This makes it perfect for the serious DV videographer who’s ready to dive head-first into NLE. The $4395 package includes a G3 with a 300Mhz processor tricked out with 192MB RAM, a 6GB system drive plus an additional 17GB capture drive, a ViewSonic 19-inch VGA monitor, a Sony 14-inch NTSC monitor and a trio of Altec Lansing speakers. To run on all of this hardware, ProMax bundles the deal with Adobe Premiere 5.1, Boris FX 3.5 and their own StudioMAX capture drivers. ProMax will also sell individual or groups of components of the FireMax system to the customer who may already have some of the pieces.


The FireMAX Studio Core System was very easy to set up and cable. The G3 uses a USB (Universal Serial Bus) keyboard, and a small round translucent blue USB mouse plugs into either side of the keyboard. The G3’s tower has an interesting feature–you can access the interior of the tower in a second by pulling on a plastic ring on the side. This makes performing upgrades, like a RAM upgrade, a very simple prospect. Another cool feature is that the system uses the FireWire ports built-into all new G3s, helping keep costs low. The speakers and VGA monitor were also very easy to set up. As is typical with many FireWire capture systems, you have to wire the NTSC monitor out of your camcorder.

Once you’ve wired up the computer, you’re ready to capture some video through the FireWire port. ProMax includes a 6-pin to 4-pin FireWire cable in the package, and it is plenty long to reach anywhere on your average computer desk.

Light a Fire in your Wire


Capturing video onto the FireMAX Studio was a snap. Using the FireWire cable, the video was easy to put onto the G3 for use in Adobe Premiere 5.1. This isn’t a review of Premiere (although you can read one in the June 99 issue of Videomaker), so we won’t get into the details of editing video with it again. However, it’s sufficient to say that the G3 had enough computer horse power to easily handle everything we threw at it.

Capturing from the Sony DCR-TRV900 was a no-hassle proposition, although our first shot at making the system work with our Canon XL1 resulted in a weird series of error messages. Although after more tweaking, we were finally able to get the system to work with Canon’s XL1.

Sizing up the Deal


The FireMAX Studio Core System is a great deal if you want to get into NLE, and you don’t own any components to your editing bay yet. If you already own a good large VGA monitor, or a studio NTSC monitor, you can order from ProMax only the parts that you need. The bottom line is that if you want a high-powered Apple-based NLE workstation, and want to be able to plug it in and get to work editing, the FireMAX Studio Core System is a great choice. Now Apple has a turnkey NLE solution of their own, so we’ll have to compare it to the ProMax in an upcoming Videomaker.

Don’t let the blue case fool you into thinking this is some consumer-oriented stripped-down computer, this NLE system is loaded with power and it’s easy-to-use.