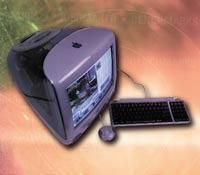 An iMac That Edits DV

After seeing the new Graphite special edition iMac for ourselves, we must say that he probably wasnt far from the truth. In fact, its probably the easiest way to edit video weve ever seen. The designers at Apple have aimed at a simple, accessible, living-room style solution for editing DV video, and theyve succeeded. Though the editing functions of the new DV iMacs are not powerful enough to keep professionals happy – the quality and quantity of the transitions being especially suspect – theyre more than adequate for a wide range of hobbyists, weekend-video-warrior types who just want a simple way to perform basic editing tasks.


The Triumph of Design

Like most Apple products, the Graphite Special Edition iMac DV is well-designed and stylish. You can tote it easily from place to place and fit it nicely into your living room or den.

When you first open up the iMovie software, youre presented with an interface thats every bit as stylish as the rest of the iMac. A preview/playback window dominates the upper left side of the screen, and a library holding clips and still images sits on the upper right. Underneath it all sits the editing window, which utilizes a sort of hybrid timeline/storyboard approach.

When you plug in the FireWire cable (which is available free of charge for a limited time), put your camcorder in VCR mode. This highlights the VCR buttons located below iMovies preview window, giving you full deck control. Though iMovie does not provide any kind of batch capture, it does detect scene changes as you capture. Once you roll tape and click the Import

button, iMovie separates each scene automatically, starting a new clip precisely where the old one left off. This is a great timesaving feature, but it is possible to fool it with rapid movement, such as a whip pan in the middle of a shot.

Simply load your clips into the library and drag them onto the timeline in their proper order to make edits. From the timeline, you can trim clips with frame accuracy, add transitions, create and overlay titles and incorporate voiceover narration and/or background music. Lets look in detail at how iMovie handles each of these operations.

iMovie handles clip trimming directly through the Preview window. The playback status bar, which is on the bottom of the window, indicates the current position youre looking at within the clip. To trim a clip, click the mouse just below the playback status bar and manipulate a pair of sliders to define the portion of the clip youd like to keep. Once youve defined the clip, selecting the Crop option from a pull-down menu trims the clip to the desired length.

To create transitions in iMovie, you simply select the transition you want from the Transitions menu, and drag it onto your timeline between the desired clips. Once in place, the transition appears as a small box on the timeline. Underneath the box that represents the transition, a red line begins to grow from left to right, indicating that the rendering for the selected transition is already underway. Render times with the iMacs 400MHz PowerPC G3 processor were pretty fast, coming in at about 45 seconds for a two-second transition.

Only six transitions are available in iMovie, but it includes the most standard transitions (dissolve, fade to/from black, etc), and this may actually be more of a plus than a minus. Specifically, itll keep fledgling video editors from being confused by too many choices, and encourage them to stick with the simple transitions, which are usually more effective. We did notice a lack of sharpness in some of the edges of the transitions, such as the push right effect, but its hardly noticeable, and most hobbyist videographers wont care.

Likewise, titling in iMovie is simple and effective. The software includes twelve title styles and an array of high-quality fonts, which is just what youd expect from an Apple computer. The styles of the included titles range from very basic to very hip; theres even an MTV, music-video style available, which places a small block of text in the lower left side of the screen (for song title, artist, etc.)

Music, sound effects and voice-over narration are (you guessed it) very easy to implement in iMovie. If you want to rip a track directly from a commercial CD, go right ahead. Its just a matter of inserting a CD, dragging and dropping the song from the list that pops up in iMovie, and placing it on the soundtrack. As for sound effects, iMovie comes with a good all-around selection of effects like applause, cats meow, crazy laughter, telephone ringing and a number of other usable effects. Incorporating these effects, or your own voice-over narration, is as simple as dragging and dropping the desired audio onto the timeline.