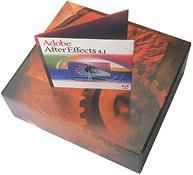 Compositing and effects software packages – those expensive technical wonders that allow you to seamlessly merge multiple streams of video, graphics, 3D animation, title fonts, etc. – have come a long way in the past few years. And though the time that passed between the release of version 4.0 and 4.1 of Adobe’s After Effects Production Bundle was a mere three months, the latest version adds a wealth of powerful new tools to an already feature-rich compositing and effects package. A favorite of special effects artists, videographers and 3D animators, After Effects holds a secure position in the digital content-creation industry. With version 4.1, After Effects Production Bundle should solidify that position.

Aimed primarily at high-end users, the After Effects 4.1 Production Bundle is a sophisticated product. Though version 4.1 has many new features, a short list of the most important ones includes network rendering support, flowcharts to track your compositions, the ability to import and export a wider range of file types, 3D z-buffer effects and the potential to reach IMAX-quality resolutions.

The latest version of the After Effects production bundle contains such a wide range of new features that it’s difficult to decide where to begin, so we’ll start with the part we liked best: network rendering. If you install the After Effects Production Bundle on any number of networked computers, you can use all of them together (in what geeks call parallel distributed processing) to greatly decrease the amount of time necessary to render a project. This is great news for effects production houses and other businesses that deal in high-resolution, render-intensive effects. You don’t need any additional licenses to install the After Effects Render Engine on networked computers, so taking advantage of this ability doesn’t cost extra, no matter how many machines you have available on your system.

Previous versions of After Effects used a simple stacked-timeline approach to compositing multiple-layered effects. The current version carries on this tradition, but also incorporates a flowchart view that helps in visualizing a multi-tiered production’s workflow. This is an imitation of the techniques currently used in top-shelf compositing software packages (like Maya and others) with price tags several times that of the After Effects Production Bundle.

The After Effects 4.1 Production Bundle includes support for some powerful 3D effects, including depth-of-field manipulation and fog. Also supported is the ability to import 3D information from industry-standard 3D object files and slice along the z-axis to insert other objects directly from within the After Effects interface. This feature aims to reduce the amount of time you spend switching back and forth between your 3D modeling software and your effects/compositing software, while adding a third dimension to the advanced motion controls and other features available in After Effects. Another 3D feature available in the After Effects 4.1 Production Bundle is the ID Matte, which isolates individual objects in a 3D scene so you can selectively apply movement and other effects. This feature, like many others in the current version of After Effects, is primarily useful to professionals who work with high-end, industry-standard 3D packages like Softimage and ElectricImage.

Along with all of the new features and functionality, version 4.1 also has every bit of the effects-editing power and motion control that was available in previous versions.

If you’re looking for a light, user-friendly approach to video compositing and effects, then Adobe’s After Effects 4.1 Production Bundle is just not for you. If you want a slightly lighter yet still powerful approach, take a look at the regular (non-production) version of After Effects 4.1 ($689), which includes none of the features described above, but still provides plenty of effects-editing muscle for video production. But if you want access to every ounce of effects-composition muscle that the pros use, then you won’t be disappointed with the production bundle. It’s certainly expensive, but for the quantity and quality of effects it provides, it’s worth every penny.