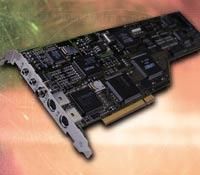 
The AV Master audio/video capture card from FAST Multimedia has been a stalwart contender in the worldwide PC-based video capture market for several years now. Now in its third incarnation, the combination of low cost, built-in audio capture/playback and compelling software bundles have earned it a place among the most popular solutions for hobbyist and low-end professional nonlinear editors.

To put the AV Master 2000 through its paces, we installed it in our Benchmarks test computer (Pentium II 350MHz, 64MB RAM, 9GB Ultra-Wide SCSI-2 capture drive) and digitized footage from a Canon ES7000 Hi8 camcorder.

The latest version of the AV Master uses the same hardware as earlier versions; if you were looking for an upgrade in the cards capture quality, data rate or input/output connections, then youre likely to be disappointed by the AV Master 2000. Within the FastCap video capture utility, a handy mouse-driven sliding bar controls the data rate at which video and audio are captured to the hard drive. Conveniently, this bar is color-coded to indicate which data rates work best for the AV Master 2000. Safe capture rates (up to 4MB per second) are colored green, indicating that the board is capable of capturing video anywhere within the green range without ever dropping a frame. Our own tests confirmed that the AV Master 2000 will capture video at up to 4MB per second (roughly 6:1) with synchronized 48MHz, 16-bit audio without a hitch.

Though the hardware is unchanged, the new package does include an exciting new piece of software called PowerPlay, which frees up hard drive space by rendering only transitions, titles and graphics. It then uses the existing digitized footage to construct the rest of the video as its played back. The PowerPlay software installs itself into the bundled Ulead MediaStudio softwares Preview feature. This gives video editors a quick way to output files in the NTSC format without having to render an entirely new video file, thus increasing the amount of hard disk space available for editing. This feature did not work correctly the first time we tried to use it; instead, we found it necessary to manipulate MediaStudios preview settings a bit before everything worked properly. Also, the fact that the PowerPlay software works within MediaStudios Preview feature (as opposed to its Create Video feature, which is usually used for print-to-tape functions) makes working with it a little less than intuitive. Once we got it working, however, PowerPlay provided a useful alternative to the standard method of rendering an entirely new file each time you output a project to tape.

The AV Master 2000 also includes MatchWares Mediator 5 LE, a software solution for authoring CD-ROM multimedia. The inclusion of this software in the bundle suggests that perhaps FAST Multimedia is targeting hobbyists who wish to create their own personal video CD-ROMs, or perhaps business people who want to include video in their multimedia presentations. Streaming video producers will be thrilled about the ability of the bundled Ulead MediaStudio 5.2 software to output in either RealNetworks RealVideo or Microsofts NetShow streaming video formats.

The documentation that comes with the AV Master 2000 is enhanced by the inclusion of FASTs Video Pocket Guide, a handy beginners manual for shooting and editing video.

This, combined with the new lower price, the excellent software bundle and the PowerPlay feature, makes the AV Master 2000 an excellent choice for those who want to upgrade an existing computer for nonlinear video editing. You may have to mess with your software settings a little bit to get it to do what you want, but if youre not afraid to get under the hood of your PC now and then, youll likely be satisfied with the power that the AV Master 2000 offers. — JM