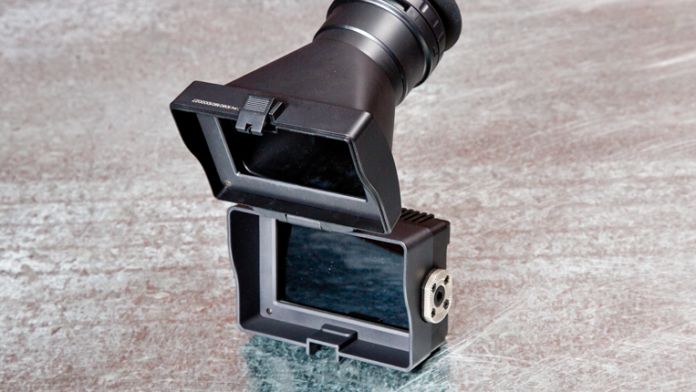 It’s ironic that in the age of High Definition and 4K, more cameras don’t come with viewfinders and panels that preview those resolutions. Sure there are focus assist features and peaking guides, but sometimes that only goes so far. I’ve been on a low-budget Hollywood crew that was toting a 30-inch HD computer monitor along during an outdoor shoot. It was heavy, required a ridiculously long extension cord and somehow I ended up lugging it between shooting setups.

The F&V SpectraHD 4 is a professional grade solution that provides 1280 x 720 HD resolution in a compact, lightweight and very portable monitor. It caters not only to the professional with its SDI connectivity, but also to the enthusiast with an HDMI support. Plus, you can give a lucky crewmember a break by leaving the bulky computer monitor safely at home or in the editing bay.

The SpectraHD is a very lightweight monitor with its own hard plastic hood for shade. The screen is glossy and the back is bristling with inputs, outputs and power connections. The right side sports an Arri Rosette connection and the bottom has threads for a 1/4-20-inch shoe mount connector. The left side is where we find a small thumbwheel above five little buttons. The SpectraHD has three power options: plug it into a wall outlet, use the tally connection or snap a battery on the Sony NP-F battery plate.

The five included cables are a BNC connector, USB to mini-USB, HDMI to mini-HDMI, D-tap to mini-XLR and a two-part power cord. There’s also a “Junior Joint” with a multi-position ball adjustment for connecting the SpectraHD to a camera shoe and angling it to the most convenient position. The Loupe Kit option includes a black plastic loupe with hinges that allow it to swing down and snap into place in front of the SpectraHD, effectively turning it into a viewfinder. Unsnap the lens cap and attach the soft rubber eyecup and it’s ready to go. The loupe also has a handy diopter adjustment slider for adjusting the loupe to your vision.

In, Out and Through

The connection capabilities of the SpectraHD deserve some special note. It has HDMI in and out, SDI in and out and a mini-XLR tally connection. The HDMI is capable of looping through, meaning it can display the video signal and then send it along to another device. The SDI connection does the exact same thing. The SpectraHD can even convert an HDMI signal into SDI.
The mini-XLR tally connection can provide power to the unit as well as allow it to receive a tally signal from a switchboard on a multi-camera shoot, illuminating a small tally light above the screen on the front. The mini-USB port is present for future firmware upgrades. Last but not least, there’s a ?-inch headphone jack that serves up the audio to go with your video.

The 170 degree viewing angle is indeed “as advertised.” The screen only slightly darkens as the viewer moves off-center. View it at an angle greater than 170 degrees and you’ll find the screen shade hood begins to block visibility. At 4.3 inches, the monitor is best suited to close-to-medium range viewing. Onscreen detail is fine enough to observe interlacing lines when viewing fast motion 60i footage. Chroma, brightness and contrast all display well and are adjustable to taste. Testing with color footage and SMPTE color bars show good quality color reproduction.

The glossy screen can be a drawback during outdoor daylight shoots. The SpectraHD tends to reflect quite a bit, leaving the viewer attempting to shade the monitor at just the right angle to see what’s onscreen. If you catch a reflection of the sun, visibility goes to near zero. This is where the loupe attachment comes in handy. While it only allows one person to see the screen, it makes bright daylight operation infinitely better. At seven inches long, however, the loupe has a large profile.

When previewing footage on the SpectraHD, there are a lot of options and shot assists at your disposal. The menu allows adjustment of the backlight, brightness, contrast, hue, chroma, sharpness and color temperature. You can easily check the red, green, blue and monochrome fields individually and in real time. All of this allows you to more closely match it to another monitor or your personal visual preference. There are also options to flip the screen horizontally, vertically or both should the need arise.

The safety zone guides are extremely customizable from 80 to 95 percent and in different colors and thicknesses. You can activate color or monochrome peaking indicators, change the peaking level or color or activate the false color option. It can also display a histogram, vector and an audio volume column for additional reference. The faithful zebra stripes are also present.

Of the five buttons on the side, four are user defined shortcut buttons. Map them to a feature in the menu, and they’re ready to go. You can also press the thumbwheel down to quickly access backlight, brightness, contrast, sharpness and volume setting shortcuts.

One oddly missing feature is a battery life indicator. When running out of battery power, the unit turns off without so much as a warning. There’s also a menu timeout feature that exits the onscreen menu after a certain period of inactivity. When set to just 15 seconds, it makes the menus disappear annoyingly fast. It is adjustable up to 30 seconds, or you can turn it off if you prefer exiting the menus manually.

Finally, one place the SpectraHD truly shines is as a monitor for when the camera operator can’t physically be next to the camera. Whether the camera is up in the air at the end of a jib arm or secured to the hood of a car, all it takes is a long cable to the SpectraHD to make sure you got the shot.

The SpectraHD 4 is accessible to both the video professional and the enthusiast alike. It’s a great portable HD monitor to accompany HDMI and SDI capable equipment. It has a sharp screen, great viewing angles and plenty of monitoring assists. With the loupe accessory, it becomes a complete monitoring system capable of operation through daytime and night shoots alike.